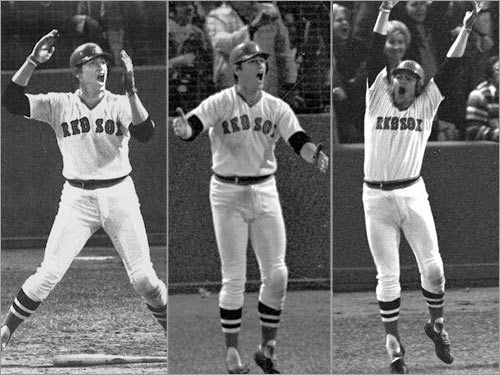 Just like he dreamed in back in Charlestown, NH

In honor of the Red Sox-Reds matchup at Fenway Park, I thought it would be fun to revisit the most iconic moment in the history of this rivalry -- Carlton Fisk's home run to win Game Six of the 1975 Boston-Cincinnati World Series.

How was an NBC cameraman situated inside Fenway's Green Monster Wall astute enough to capture Fisk's dramatic reaction as he watched his fly ball to left hit the foul pole in the 12th inning? Read this excerpt from my 2011 book, Fenway Park: The Centennial to find out:


The score was still 6-6 in the bottom of the 12th, the clock inching past 12:30 a.m., when Fisk led off for Boston. Standing beside Fred Lynn in the on-deck circle as Reds reliever Pat Darcy took his warm-up tosses, the self-assured catcher told his teammate, "I'll get on, and you drive me in."

Some fans were still settling into their seats after grabbing post-midnight snacks as Fisk took Darcy's first pitch high for a ball. He then hit the next one on a rising trajectory down the left-field line, toward the foul pole that rose above the Green Monster. "It was a question of it being fair or foul," Fisk told reporters after the game. "The wind must have carried it 15 feet toward the foul pole. I just stood there and watched. I didn't want to miss seeing it go out." 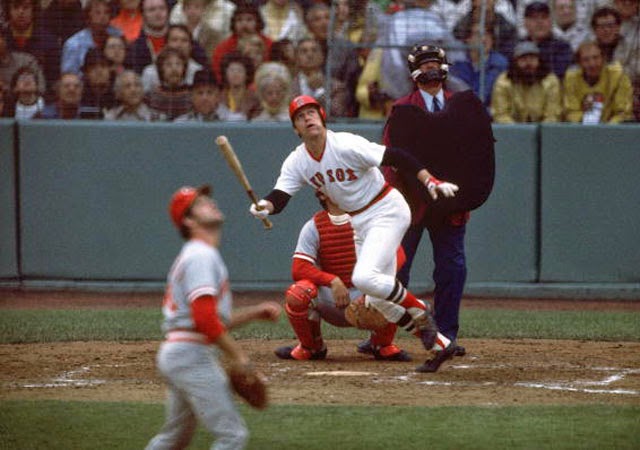 Actually, Fisk did more than just watch. In an effort to circumvent the wind, he stepped out of the batter's box and began leaping, waving his hands in an effort to wish the ball into play. And while he, Lynn, and everybody else at Fenway was tracking the flight of the ball, the 36 million fans viewing the Series on NBC were treated to the raw emotion of Fisk leaping and pleading. The footage, shot by veteran cameraman Lou Gerard, gave birth to what became known in TV sports as the "reaction shot," and it's one of the most replayed images in sports history.

All thanks to a rat.

The inside of the Green Monster was never the Taj Mahal, but by the mid-'70s it had become downright nasty -- a dark, dirty, graffiti-covered pit in which a few rats sought solace from Joe Mooney's groundscrew. It was here where Gerard had set up his camera for Game 6, and his instructions from director Harry Coyle were to follow the path of the ball if it was hit toward him -- or if not, then to stay zeroed in on Fisk. 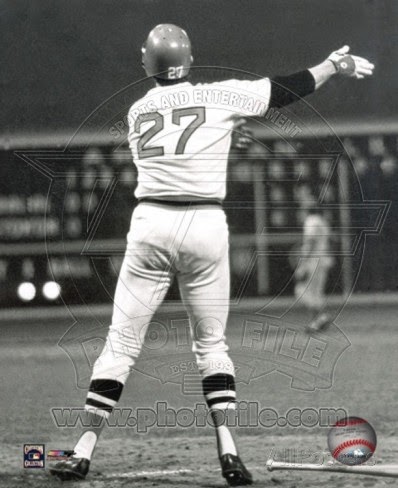 Gerard was set to carry out the assignment until he spotted one of the Wall's furry freeloaders perched atop his camera. Shocked, he momentarily froze rather than swivel his camera to track the ball, and his lens stayed hooked on Fisk. It was up to Dick Stockton, calling the game for NBC viewers, to describe for them where the ball was headed:

In the end, Fisk's shot bounced off the foul pole and fell harmlessly back down to left fielder George Foster as Fisk rounded the bases. Perhaps due to the crowd's sheer enthusiasm, just a few overzealous fans outflanked a mild security presence to vault onto the field and slap Fisk high-fives as he rounded third and headed home to end what was then the longest game (four hours, one minute) in World Series history. 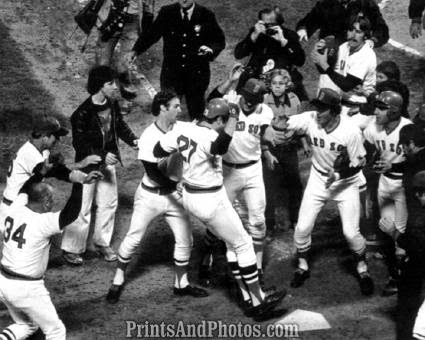 Call off the seventh game!

Throughout New England, car horns honked, church bells rang, and kids with transistor radios under their pillows jumped on their beds. Fenway Park organist John Kiley broke into a succession of festive numbers such as the "Beer Barrel Polka" -- this was long before rock music was piped into the park -- and fans sang along.

Banging away at his portable typewriter above home plate, Ray Fitzgerald of the Boston Globe suggested in print that a seventh game was not necessary. How could anything top this? How could either of these teams lose? But the combatants were back at Fenway later the same day to settle matters. 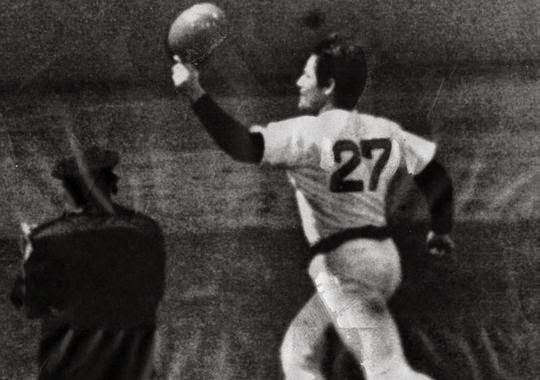