As I am writing this the clock reads 12:46 a.m.; almost exactly 25 years ago at this hour, on Oct. 26, 1986, the Red Sox did something that makes the last few awful weeks feel like a dip in an MDC kiddy pool. And ever since the horrific events of Game 6 unfolded, I have lived with the guilt that the Sox should have won the '86 World Series in six games instead of losing it in seven -- if only I had been thinking more sensibly.
It all started when my friend Scott and I heard about some tickets available for Game 5 of the Series at Fenway Park. The Mets and Sox were tied at two games apiece, and Game 1 hero Bruce Hurst was slated to go again for Boston. Scott and I were sophomores at Syracuse, located deep in the cold heart of Mets country, and we were anxious both to get to Fenway and get away from all the obnoxious New Yawkers back at our dorm. This being long before Craig's List, Stub Hub, and other Internet tickets options, we would have to drive to Boston to get our tickets -- knowing full well that our 300-mile journey would be for naught if something fell through.

It was certainly a chance worth taking, and with my girlfriend Wendy joining us in the old Cruising Vessel (see entry of July 14, 2011 at http://saulwisnia.blogspot.com/2011/07/how-i-lost-my-girlfriend-to-dwight.html) we took off for home and Kenmore Square. The vessel made it in one piece -- which we thought boded well for a successful overall journey. We were wrong.
The tickets did indeed fall through, and although Scott and I went down to Fenway the night of the game, we found nothing in the starving colleague student price range available from scalpers. We wound up watching from a bar as Hurst threw another masterpiece at the Mets, and the Sox headed for Shea Stadium one win away from their first World Series title in 68 years.

Scott and I now changed our thinking. We figured we'd stay in Boston a few more days, (hopefully) watch the Red Sox win Game 6, and then join in the downtown parade. If the Red Sox lost Game 6, we'd also stay for Game 7 and the eventual victory celebration. When Game 6 got under way, Scott headed for a loud locale where he could scream with other Sox fans while I hunkered down with Wendy in the quiet den of my boyhood home to watch the NBC broadcast.
I certainly don't need to tell you what happened that evening at Shea, but I am now ready to explain my culpability. In the 10th inning, once the Red Sox took a 5-3 lead, I started thinking about how I would now be able to shut up Big Dave, Buddha, and the rest of the Mets crazies back on campus.
"Go get my camera," I yelled to Wendy, and as I watched the first two Mets in the bottom of the 10th quickly make outs, Wendy arrived back in the doorway with my Cannon sure-shot and a devilish grin. She knew how much this meant to me, and we agreed the best picture for me to copy and distribute to Mets fans would be a blow-up of me standing beside the TV with my hand raised in a classic middle-fingered salute.


As Gary Carter came up for New York, I had Wendy get the camera ready. Only after Carter singled, and then Kevin Mitchell, and then Ray Knight (making it 5-4),  did I realize what was happening and scream for her to stop. But it was too late; moments later Mitchell scored on a wild pitch/passed ball to tie the game, and a moment after that Mookie Wilson hit the ground ball heard 'round the world to Bill Buckner at first. Like generations of Red Sox fans, I had mistakenly assumed victory was in the bag before the last pitch. 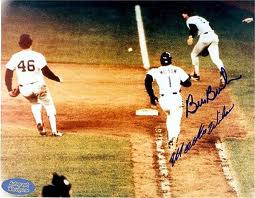 After a rainout the next day, I headed back to Syracuse without the 100 photocopies of my Game 6 victory photo originally slated for the doors of Mets fans. The wrong team had won, and back on campus I holed myself up with other Red Sox backers in a dormitory lounge for Game 7. Boston held a 3-0 lead into the bottom of the sixth inning, and although we kept the cameras safely in our pockets, those of us without good sense began imagining again about how we'd celebrate our grand victory in enemy territory.

An hour later, I was running for my room with the taunts of Mets fans ringing in my ears; New York had come back to win the game and series, of course, and when I opened my door the next morning it was covered with streamers and front-page headlines from the Times, Daily News, and Post. Wendy and I didn't last much past Christmas break, and I would have to wait nearly 20 years for my revenge over Gotham. 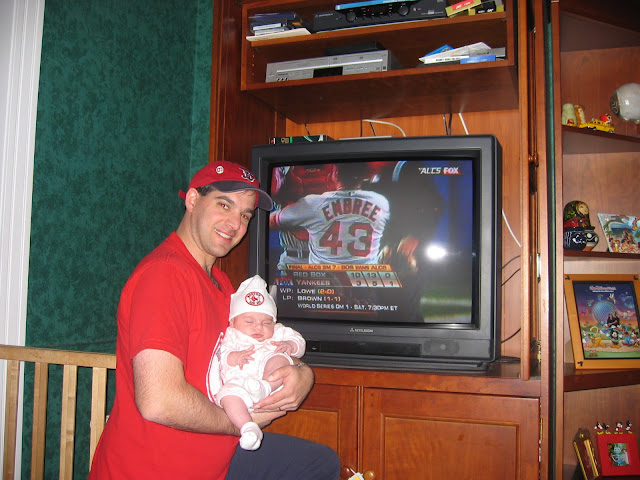 Posted by Saul Wisnia at 3:21 AM No comments:

My Glass is Half-Full (and I'm not in the dugout)

Every time you turn on the radio or glance at the paper these days, there is more dismal news on the Red Sox front. All the accusations and innuendo -- much of it hidden under guise of contrition -- has left fans and sportswriters angry and alienated. Even letting the GM leave on his own terms has turned into a complicated, drawn out process. 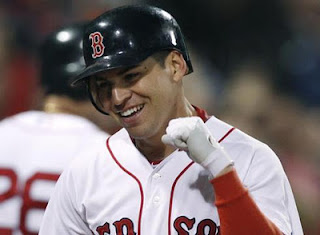 The negativity is worse than that which hung in the air after the heart-wrenching postseasons of 1986 and 2003, due to the overwhelming presence of talk radio, podcasts, and other social media channels through which media and fans can vent. Unless you go unplugged and unread, it's impossible to avoid the deluge.

My goal is to not have this blog become one of those channels.

There is nothing I can tell you here about September meltdowns, fried chicken in the dugout/clubhouse, or John Henry's free agent preferences that you don't already know. I am not a beat reporter covering the team on a daily basis, so I am not going to surmise to know the inside scoop about if or how Tito lost the clubhouse or why players may have quit on him. While I won't completely avoid these issues, I am going to try a more novel approach to the 2011-12 Hot Stove season:

How, you might ask, can I accomplish this? Well, rather than speculate why Josh Beckett was channeling CC Sabathia during the last month (in how he filled out his uniform, not how he pitched), or question the extra-base production (or lack thereof) of Adrian Gonzalez in August and September, I'll focus in this and future entries on some of the GOOD things to come out of the 2011 season -- and what we have to look forward to in '12.

Jacoby Ellsbury is the real deal. The final numbers speak loud and clear about Boston's centerfielder, the AL's "Comeback Player of the Year" and a darkhorse for MVP honors. In addition to becoming the first 30-30 man in Red Sox history, Ellsbury had 105 RBI hitting primarily leadoff and was just about the only player to deliver for Boston down the stretch with a .358 average and 8 homers in September. The one statistical knock you could have on him was that his stolen base success ratio went down quite a bit from his first two full seasons. We should all have such problems. 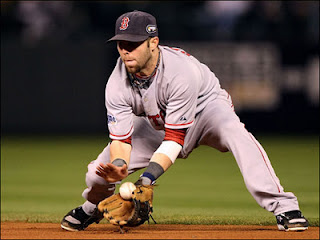 Dustin Pedroia at 70 percent is better than most guys at 100. Injuries limited Boston's driven second baseman to just 75 games in 2010, but this year despite nagging aches and pains he suited up for 159 contests and set career highs with 21 homers, 91 RBI, and 26 stolen bases. In terms of defense and determination, he's peerless. My favorite position player to watch at Fenway since Dewey Evans.

Carl Crawford will be improved at the plate and in the field. He can't be worse, right?

Jon Lester will rebound from his poor September. Unlike fellow Chickengate running buddy Josh Beckett, who seems to have one mediocre season for each good one, Lester has never had a year in which he won less than 62 percent of his games. His 76-34 lifetime record translates out to a .691 winning percentage -- the third-highest in MLB history for pitchers with 100 decisions. And he's still just 27. 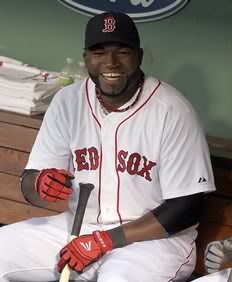 David Ortiz will stay in Boston and cement his legend. Big Papi may have suggested he was considering a switch to The Dark Side, but I suspect that's just his frustration talking. Ortiz is coming off his best season since 2007, including a .342 average at Fenway, and if he stays healthy and re-signs for three years could hit his 400th or even his 450th home run for Boston. Then, assuming he retires a Red Sox, he'll also have his number up in right field some day. Leave for more money? Ask Mo Vaughn how that worked out.

Fenway's 100th birthday will be a diamond anniversary to remember. No word yet on what the Red Sox brain trust has planned for the home opener or at other points in the 2012 season, but for all the heat they've taken for pushing their commemorative bricks and NESN packages, this ownership group has almost always gotten it right when it comes to bringing history to life.

My dream would be for the team to wear 1912 throwback uniforms all year long at Fenway -- how cool would that be? -- and play the home opener with no electronic videoboard or broadcasted music. Just the organ and the Green Monster. Maybe they could even dress the vendors in white and give them wicker baskets to carry their hot dogs and peanuts like the old days. No sushi or chowder either.

For all the hype about this year's team being the best in Red Sox history -- at least for four months-- the true holders of that title are the group that broke in Fenway a century ago. Tris Speaker, Joe Wood, and Co. were coming off a dismal September of '11 as well (10-17), but they turned things around big-time in their new home. And what better way to celebrate the park's centennial than by matching the accomplishments of the 1912 squad, which went 105-47 and won the World Series?

Maybe it will happen, and maybe it won't -- but it sure feels better to imagine such a scenario than to wallow in negativity. 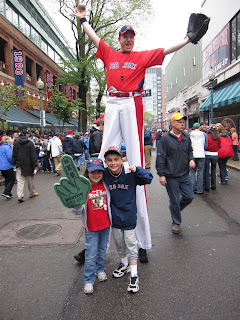