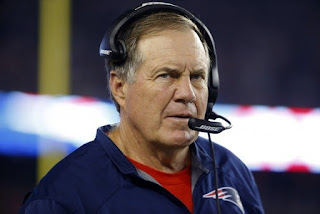 "Warm up Koji in the seventh."

A month ago columnists, talk-show hosts and fans were calling for his head. Now John Farrell looks like a genius and the Red Sox are the hottest team in baseball -- winning the close games they couldn't earlier in the year due (said the naysayers) to his weak in-game managing.

Asked after last night's eighth straight win to explain the turnaround, Farrell dropped a bombshell:  Bill Belichick has been making Boston's strategic moves before, after, and even during games. Phone calls in dugouts, clubhouses, and hotel rooms have kept the two in touch and moved the Red Sox to the verge of the postseason.

It was the Patriots coach, Farrell says, who made the decision to immediately put Koji Uehara into the eighth-inning role -- where he has thrived -- after he came off the disabled list. 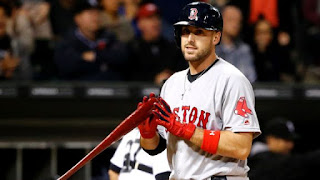 Shaw got mad -- and hot -- thanks to Belichick.

To start over-his-head rookie Yoan Mancada over Travis Shaw at third base for a few games, lighting a fire under Shaw -- and a resurgence at the plate.

To stay behind slumping Clay Buchholz, trying him in various spots and keeping his confidence up, so he'd be ready to move back into the starting rotation when needed .

To rest David Ortiz just the right amount so that his feet would hold up and he'd put up the best farewell numbers in MLB history. 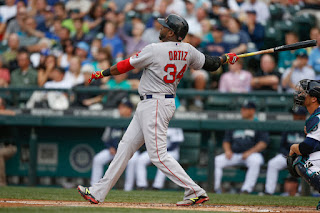 A rested Ortiz continues to rake.

To convince Hanley Ramirez to cut down on his home-run swing -- thus leading to more home runs and fewer helmet-flying strikeouts.

To move Dustin Pedroia into the lead-off spot, against the second baseman's wishes, sparking a Laser Show batting spree reminiscent of 2008.

"It's particularly tough when we have games at the same time, like last night, but Bill is such a mastermind that he can make out our lineup at the same time he's going over plays with a rookie quarterback making his first start," says Farrell. "I mean, the guy is a genius." 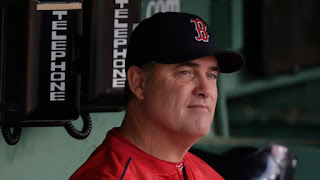 I wish Bill would call.

Farrell says he decided to come clean about the arrangement because he wanted the world to know just how brilliant a tactician Belichick is -- even if it costs him his job.

"I've been around baseball for 40 years," he says, "but Bill is in a league all by himself." 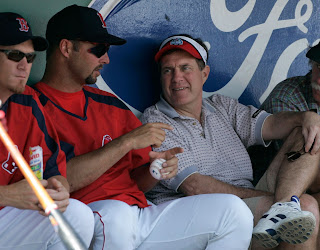 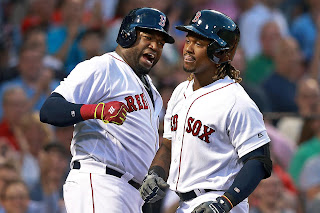 David Ortiz and Dustin Pedroia may be the only everyday players on the Red Sox who also played for Boston's 2007 World Series champions, but there is another guy in the lineup whose performance was a major factor in that title.

No use scouring the '07 lineup on baseballreference,com, you won't find him there.

American League Co-Player of the Week Hanley Ramirez has emerged as the hottest hitter in baseball, with 4 home runs and 9 RBI during a four-game sweep of the Yankees at Fenway this past weekend and 12 homers overall in his last 21 contests. Ramirez is finally fulfilling the expectations that former GM Ben Cherington was hoping for when he signed the free agent in the winter of 2014-15, and his surge has helped Boston to a 3.5-game lead over the second-place Orioles in the tight AL East race entering tonight's showdown in Baltimore,

If Ramirez is able to keep it up, and the Red Sox reach the postseason, it will be the second time he's paid big dividends on Yawkey Way. Back in 2005, after an excellent season in Class AA Portland, he was the key to a trade with the Florida Marlins that brought big right-handed pitcher Josh Beckett and third baseman Mike Lowell to Boston.

Beckett took a season to acclimate to the American League, but in 2007 he was 20-7 and the ace of a World Series championship Red Sox staff. Lowell, considered a throw-in from Florida in the original trade, was a quiet leader on and off the field whose unexpected offensive resurgence (.324 with 121 RBI) was also central to the '07 title. In fact, Lowell was MVP of that October's World Series, to which Beckett contributed a Game 1 victory. 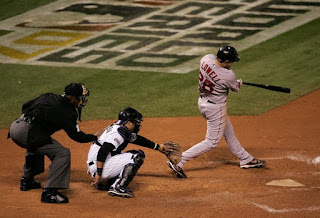 So while Cherington may have been forced to resign last summer after the poor performance of Ramirez (a .249 average and brutal defense in left field) and fellow free agent washout Pablo Sandoval, the signing isn't looking quite so bad now, In fact, Ramirez's booming bat and solid work at a new position of first base has been one of this season's greatest surprises.

If Hanley can keep it up for another month, there will be a lot more to celebrate than just a sweep of the Yankees.
Posted by Saul Wisnia at 6:43 PM 1 comment: 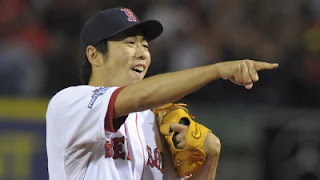 Is Koji back to form? Red Sox fans hope so.

Despite all the firepower in the Red Sox lineup and a revitalized pitching staff led by a likely 20-game winner, two guys with ERAs north of 4.35 who were all but forgotten a few months ago could play a major factor in Boston's playoff chances:

Buchholz was a much-maligned mop-up man earlier in the summer after flaming out as a starter, It was thought that his days in Boston were all but done, his great potential never quite realized due to injuries and inconsistency. From July 2 to July 20, the bullpen outcast did not appear in a game.

Then, suddenly, he had a shot at redemption. After several other relievers failed as eighth-inning setup men, John Farrell gave Buchholz the ball -- and he surprised everyone by embracing the role. Suddenly the Red Sox were not blowing games late, or at least not as often. 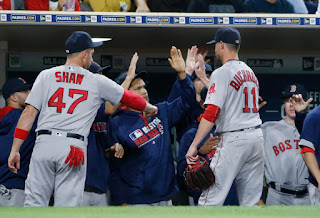 Buchholz has earned his teammates' respect.

Knuckleballer Steven Wright's right shoulder injury offered yet another opportunity: the chance for Buchholz to reclaim a spot in the starting rotation. Once again he answered the call, this time with a string of solid performances that sustained the club in the first weeks after Wright went down.

Overall, Buchholz has been one of Boston's best pitchers for two months. In his past 12 appearances, including 4 starts, he has a 2.20 ERA over 32.2 innings, with 22 strikeouts, 8 walks, and a .220 opponent's batting average. 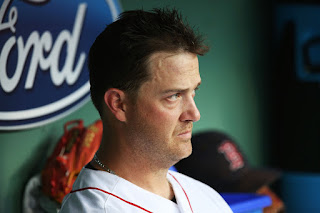 If Wright's not right, the Sox need Clay to stay.

Now, with Wright's problem apparently bigger than initially expected, these developments become every more important. There is a good chance Wright will not return this year, leaving it up to Buchholz to hold down a permanent spot in the rotation -- at least for the remainder of the regular season.

If there is more than just a regular season for Boston in 2016 also depends on Uehara. The game-closing hero of 2013 was not expected to do as much this year, with the Red Sox picking up All-Star closer Craig Kimbrel and setup man Carson Smith. When Smith suffered a spring-training injury that eventually required Tommy John surgery, Koji stepped in and was up-and-down in the eighth-inning role.

Uehara later filled in admirably as closer when Kimbrel was hurt in July, and Koji looked to be getting on one of his hot streaks in late July when he too went on the DL with a torn pectoral muscle. Like Buchholz, fans wrote off Uehara at this point, especially given his advanced age of 41. 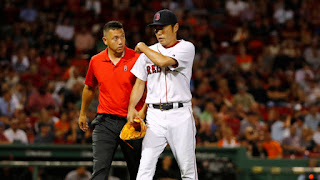 But just wait a minute...

Koji got through rehab faster than expected, and was brought off the DL this week-- amazingly pitching a perfect eighth inning (with two strikeouts) Wednesday night at San Diego. He threw 11 strikes on 13 pitches and said afterward that he felt great.

Can Koji step back into a setup role, and spell Kimbrel at closer when needed?

Can Buchholz keep turning in stalwart performances in his return from the dead?

The answers to both questions will go a long way in determining the fate of the Red Sox during the next wild 23-game race to the finish. 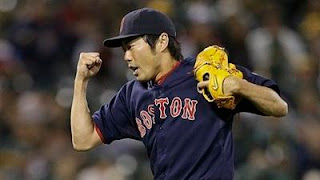 Posted by Saul Wisnia at 5:05 PM No comments: