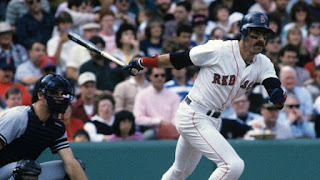 Another clutch hit for Bill Buckner.
Thirty-five years and two days ago, the Red Sox traded Dennis Eckersley and Mike Brumley to the Chicago Cubs for Bill Buckner. The trade was a key to Boston winning the 1986 American League pennant.

Eckersley, battling back and shoulder injuries as well as personal demons, was struggling along with a 5.01 ERA at the time of the May 25, 1984 deal. He would show sparks of brilliance in Chicago, but really wouldn't return to All-Star status until a move to the bullpen. Brumley, then a minor leaguer, was a lifetime .206 hitter in the majors. Neither he or Eck would likely have helped the '86 Red Sox.

Buckner, however, played a major role in Boston's AL championship that year. He had 102 RBIs in 1986 -- 50 before the All-Star Game and 52 after it. The Red Sox entered September in those pre-Wild Card days in first place, but just 3.5 games ahead of second-place Toronto. It was Billy Buck who helped Boston pull away as the team's best hitter in the final weeks. He batted .315 with 8 homers, 22 RBI, and a .938 OPS in September and October.

So please don't add a comment below saying that Buckner cost the Red Sox the '86 World Series. If it was not for him, a guy who played hard and well despite being in immense pain, that club most likely would never have gotten as far as it did.

THAT should be how Boston fans remember him, with headlines like the one above. Not for that other thing. But there is always going to be that other thing, and that will be in most of the headlines.

When my son told me a few minutes ago that Buckner had died at age 69, a robust man felled by the rare disease of Lewy Body Dementia, my thoughts like everyone else's returned to 1986 and the moment that unfairly condemned this All-Star and borderline Hall of Fame-caliber player to years of abuse.

This was before Boston was Titletown, when the Red Sox were closing in on 70 years of heartbreak instead of going for their fifth world championship in 15 years. Buckner took the jokes and the boos and the taunting that came his way after his error in Game Six of the 1986 World Series as best as I can imagine anybody doing, and when it got too tough for his wife or kids to handle he moved west to Idaho. It was there he found peace, before dying in his native Vallejo, California this morning with his family by his side.

I wish he had enjoyed that peace for far longer.

Buckner at peace, coaching for Class A Boise.

First some more facts: Buckner was already a former batting champion and All-Star with a .295 lifetime batting average and just shy of 2,000 hits when the Red Sox picked him up in 1984. He continued to perform like an All-Star in Boston, batting 299 with 110 RBIs and 201 hits for the 1985 Red Sox despite hitting just 16 home runs. He usually batted third or fourth because he was so adept at moving runners along. At first base, he was a solid defender who was especially strong at scooping up low throws.

He did this at less than his peak physically. Once one of the fastest runners in the National League, who roamed the outfield like a deer, Buckner severely injured his left ankle playing for the Dodgers in early 1975 and it hampered him the rest of his career. He managed to play more than 1800 games after the injury, often at an elite level, but his days as an outfielder were over.

The logical spot for Buckner was at third or first base, but the Dodgers had Ron Cey and Steve Garvey entrenched at those spots. So Buckner was traded to the lowly Cubs, where he took over at first, became a fan favorite, and won the 1980 batting title.

Jeff English started his fine biography on Buckner for the Society of American Baseball Research (SABR) with a definition:

GAMER 1. A player who approaches the game with a tenacious, spirited attack and continues to play even when hurt; a competitor; a player who doesn't make excuses. The term is a compliment, most especially when it comes from another player.

That was Buckner. He played nearly every day, with no whining, despite the pain. Entering 1986, he was only 34 and already had close to 2,200 hits; 3,000 and Cooperstown still seemed a very real possibility. Bone spurs in his left ankle were bothering him so much by this point that he announced he would be having surgery after the '86 season. In the meantime, there was a pennant to win, so Buckner spent hours wrapping, unwrapping, and icing his left leg before and after games. He played in 153 of Boston's 162 contests that regular season -- and three of his days off came after the Sox wrapped up the title.

By the playoffs, unfortunately, he could no longer produce despite the pain -- which only got worse when he hurt his other leg in the League Championship Series against the Angels. He hit just .214 in the ALCS, and .188 in the World Series. But Bill Buckner DID NOT lose the '86 World Series for the Red Sox any more than Bob Stanley or Rich Gedman or John McNamara or anyone else did. What Buckner did do was his best despite injuries that would have put a lesser man on the bench.

"He crawled like an alligator into one base. He went after a pop-up, fell down and did a backstroke trying to make a catch in Game 4. He scurried on hands and knees to take the first base bag with his glove. He limped out for the national anthem, bat in hand, just in case he needed a cane. He wore a high-topped right shoe for the Achilles tendon he pulled in the seventh game of the playoffs, but it was the pain in two parts of his left ankle that had created the original limp and had necessitated nine cortisone shots since April."

This underscores why Buckner should have been on the bench when Mookie Wilson came up in the tenth inning of Game Six, but also why he was not. Buckner was not going to ask to sit down -- because even at less than his best, Billy Buck felt he could do the job. The manager did not put Dave Stapleton in at first base with a two-run lead in the bottom of the 10th inning in Game Six, even though he had done so in similar situations during the playoffs. Whether he did it so Buckner could be on the field for the title that never came is irrelevant. It was a mistake, but it wasn't Buckner's mistake. 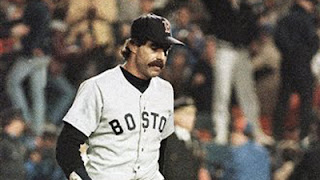 The ground ball that went through his legs and allowed the winning run to score that night was his mistake, and he never did anything less than stand up and take blame for the error -- the final miscue in a chain of bad events that cost Boston that game.  He then went out and had two hits in Game Seven, including a single to start a two-run Red Sox rally in the eighth that nearly tied the contest. But they didn't tie it, and the Mets won the game and the series -- leading to all those awful Bill Buckner jokes that made their way across the country in those pre-internet days.

I was a stupid 19-year-old college kid ranked into oblivion at Syracuse by Mets fans, and I admit I told some myself. Just thinking about my behavior then makes me sick, even if everybody else in my dorm was doing it.

Buckner never deserved the abuse, but it never let up, until Buckner was traded to the Angels the next summer. Boston fans did give him a standing ovation when he made the team in 1990, and another one when he threw out the first ball before a World Series game decades later, but as far as I'm concerned both these gestures were far too little too late. The damage was done.

"I'll be seeing clips of this thing until the day I die," Buckner told the Wall Street Journal in 1998 of his infamous error. "I accept that. On the other hand, I'll never understand why."

Neither do I. And if there was anybody who deserved to live to a ripe old age bouncing grandchildren and great-grandchildren on his knee -- or tossing them pitches in the backyard -- it was Billy Buck.

In his November 1986 piece on Buckner for Sports Illustrated, Peter Gammons related an incident that occurred after Buckner's post-World Series ankle surgery:

"I just want to tell you that you'll always be my inspiration," said a small boy who ducked into Buckner's hospital room Wednesday night. "Thanks for a great season." Then the boy disappeared."

I wish I knew who that kid was; if I did, I'd call him up now and give him my appreciation for doing at a very young age what the rest of us lunkheads did far too late. 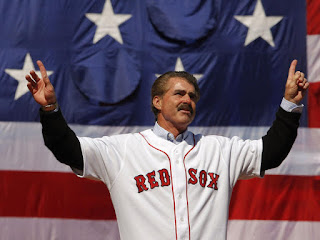