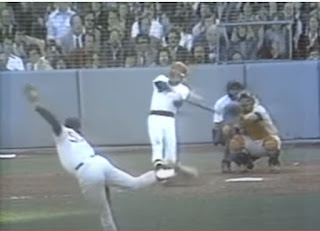 Remy delivers his game-winner against Gossage.

Nearly 11 years to the day that he stormed the field at Fenway Park with other Red Sox fans to celebrate an Impossible Dream, Jerry Remy was caught up in another melee on Boston's hallowed baseball grounds yesterday afternoon.

This time he was the hero.

Remy, who as a 14-year-old kid in Somerset, Mass. lived and died with Carl Yastrzemski and the rest of the '67 American League Champions, delivered a ninth-inning, inside-the-park home run to give the 1978 edition of his hometown team a 6-5 victory over New York in Monday's winner-take-all AL East playoff at Fenway. The winning blow -- Remy's second clutch hit in as many innings off Yankees relief ace Rich Gossage -- was a line drive that bounced past Lou Pinella and into the right-field corner as Rick Burleson (one-out walk) and Remy sprinted around the bases.

First to greet Remy in a triumphant postgame embrace was his teammate and childhood hero Yastrzemski, whose own second-inning homer off New York starter Ron Guidry had given Boston an early lead in what Yaz called "the biggest ballgame of my life." Now he, Remy, and the rest of the 100-win Red Sox are in Kansas City, where they begin the American League Championship Series against the Royals tonight at 8:30.

"I knew I hit it well, but I wasn't sure if Pinella would be able to get to it," a champagne-drenched Remy said in the winning clubhouse. "When I saw it go by him, I just ran as fast as I could and looked for the sign from [third base coach] Eddie Yost." 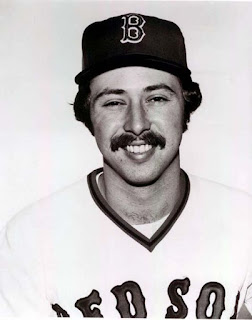 Remy was all smiles postgame.

Yost's sign was GO-GO-GO, and that's what Boston's fastest baserunner did -- sliding in just under Thurman Munson's tag at the plate. It was only Remy's third home run of the season, and the eighth of his career, but it has already taken on Ruthian status in New England.

"The littlest guy out there was the biggest one in the end," said Red Sox manager Don Zimmer, visibly exhausted after the contest. "Remy has been our sparkplug all season, and today was no different."

Early on, it was the usual suspects who provided the clutch hits for Boston. Guidry entered the game with a 24-3 record, but Yaz jumped on a fastball from the lefthander and lined a shot just inside the right-field foul pole for his 17th homer leading off the second. That gave Boston a 1-0 lead, which it extended to 2-0 on a run-scoring single in the sixth by Jim Rice -- his 139th RBI of an MVP-caliber campaign. Guidry lasted just six and one-third innings; Gossage went the rest of the way for New York. 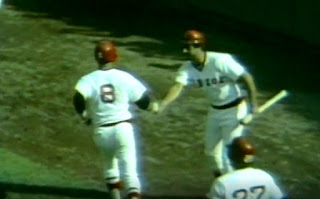 Lynn greets Yastrzemski after his HR in second.

Boston starter Mike Torrez, meanwhile, allowed just two hits and no runs through six frames, baffling the team he had helped to a World Series title last October before signing with Boston as a free agent. In the seventh, however, the big righthander came undone, allowing singles to Chris Chambliss and Roy White and then a two-out, three-run homer by light-hitting shortstop Bucky Dent.that passed just over the left-field wall.

Yastrzemski, tracking the hit all the way, was visibly shaken by this outcome. His legs buckled as he saw the ball disappear into the screen above the wall, while Dent rounded the bases in a suddenly-silent Fenway. The only cheers seemed to come from the field box to the left of the third-base visitor's dugout, where Yankees boss George Steinbrenner and other club officials were seated.

Dent's blow made it 3-2 New York. The lead eventually grew to 5-2 on a Munson double (also in the seventh) and a Reggie Jackson homer (starting off the eighth). Both came against Bob Stanley, who had relieved Torrez. The Steamer's brilliant pitching had bailed out Boston so often this season, but yesterday he just didn't have it.

Down but not out, the Red Sox rallied. They scored two runs in their half of the eight, when Remy's leadoff double was followed by RBI singles from Yastrzemski and Fred Lynn off Gossage. That set the stage for the ninth, when Burleson walked with one out -- and then Remy ended it.

The heartstopping finish seemed to mirror the long summer that preceded it. The Red Sox had exploded to a big lead in the East by July, squandered it in August and early September, and then got hot again to catch the Yankees on the final Sunday of the regular season. Yesterday's one-game playoff, the second in American League history, matched teams with identical 99-63 records that most consider the two best clubs in the majors.

Now Boston will have a chance to prove it against the AL West champion Royals in a best-of-five playoff. The first two games will be played in Kansas City; the third (and fourth and fifth if necessary) in Boston. The World Series awaits the winners. 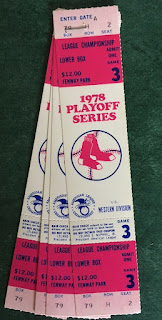 "We had great teams in '67 and '75, but I think this is the best I've ever played on," said Yastrzemski, a 17-year veteran. "After what we went through just to win our division, I think we're battle-tested and ready for anything."

"Back when I was a kid throwing tennis balls against the back of the house, I pictured myself getting a home run to win the big game," said Remy, a smile still plastered to his face an hour after he did just that. "I can't believe that dream came true." 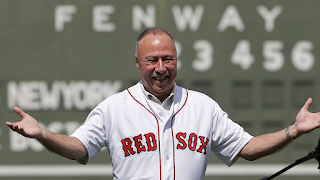 How can Red Sox fans get through 2020? We've got some suggestions 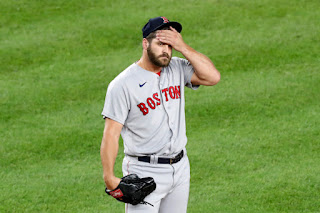 You think it's bad for YOU, Josh Osich?
Other than awaiting the daily Bobby Dalbec home run, how can a Red Sox fan make it through the rest of this disastrous 2020 season? Fenway Reflections contributing writer Keith Harrington put his thinking cap on and came up with these ideas: 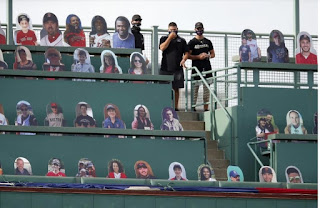 Time to get the paper bags... 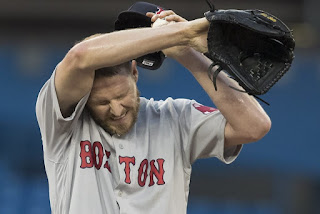 Get your paste ready kids!
Send that Everett shirt to Ebay.
Posted by Saul Wisnia at 8:18 AM 131 comments: