The era of good feeling is over. Let the boot camp begin. 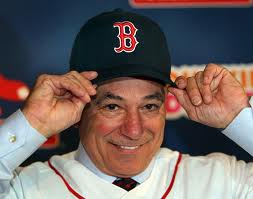 Last season's September collapse by the Red Sox and the subsequent revelations about the team's in-game dining habits has resulted in a dramatic altering in the team's image. If you listened to sports radio over the past couple weeks, it was easy to pick up: fans are angry and want a change. Enough "Sweet Caroline" and waxing poetic about 2004 and '07; it's time for these underachievers to get serious.

Bobby Valentine, of course, must set the tone. In his first spring training as manager, he needs to let his players know that he's the boss and not their buddy. Tito Francona had a reputation as a "player's manager," a style fans loved as long as it worked. Last summer it apparently stopped working, and this is a prime reason ownership brought in Valentine. He rules more with an iron fist than a warm hug, and early indications are that his Florida sessions are going to be more Dick Williams than Terry Francona. 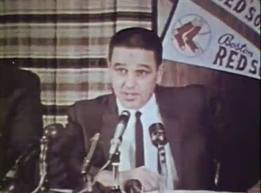 Those well-versed in Boston baseball history know the story. The Sox of the mid-1960s routinely finished near the bottom of the American League, and developed a reputation as a party-hearty crew that underachieved despite the presence of sluggers like Carl Yastrzemski, Tony Conigliaro, and Dick Stuart. Fans had largely given up on the team, and in the fall of '66 GM Dick O'Connell fired affable manager Billy Herman and brought in Williams -- a scrappy former utilityman for the club who sported the crew cut and demeanor of a Marine drill sergeant.

Williams made his mark immediately. He stripped Yaz of his captaincy -- saying that he was "the only chief of this team" -- and put the club through its paces in a spring training that felt more like basic training. There was a constant drilling of fundamentals, along with a strict evening curfew and 7 a.m. wake-up calls. When the other Williams in camp -- Red Sox immortal Ted Williams -- spent more time than Dick liked regaling players with his theories on hitting when they could have been running, the new skipper ordered him to stop. A miffed Ted left camp the next day.

The rookie boss had no trouble getting on players for making mistakes or not hustling, including stars like Yaz and Tony C. The troops grumbled, but when the season started it was clear that the methods had worked. The Sox played more of a hustling style of baseball, got contributions up and down the roster, and won back the hearts of their fans. They also won the pennant, as Williams' plaque in Cooperstown notes. 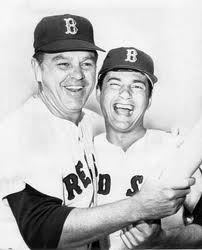 This is not 1967, of course, and today's players will not necessarily fall into line so easily. But last fall's fall suggests that a big change in attitude is needed, and Valentine sounds eerily like Dick Williams circa '67 when asked about how tough he plans to make things this spring. Here's an example:

Dick Williams:  "I give 100 percent because I hate losing. And for those players who treat losing and failure lightly I will give them something else to hate -- ME. I try to make some players win just to show me up."


Bobby Valentine: "We all know that nobody likes change except for those who are making other people change to do what they want them to do. I happen to be one of those guys who likes change because guys are doing what I want them to do. I would bet there will be 100 guys who won't really like it because it's change for them. But they'll get used to it."


Time will tell, but it will likely make for a very interesting spring. And if the results turn out like '67, nobody will be complaining come October. 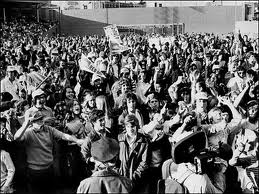 Card Stars: What singer and slugger were separated at birth?

With a few days to go until spring training, and not much big Red Sox news going on since Big Papi's signing, I figured the time was right to unveil what I hope will be a fun recurring little sideline on Fenway Reflections.

The working title is "Card Stars" -- if you have any better ideas, please let me know -- and it's my own version of "Separated at Birth." The idea is this: comb through a stack of baseball cards (any vintage), and stop when you find one that bears a striking resemblance to a celebrity from outside sports. If the player once called Fenway home, that's all the better.

In honor of Valentine's Day and the memory of Whitney Houston, who better to start with than a Hall of Fame duo that includes one guy with a trophy case full of Gold Gloves and another whose walls are filled with gold records. One guy who set the tempo for his team on the field and in the clubhouse during the 1980s and '90s, and one who set the mood for countless make-out sessions during the same period.

OK, how about I give you the player, and you come up with the celebrity (and no peaking down below).

Sweet swinging Andre Dawson (sorry for the Cubs card, but it works best for this purpose).... 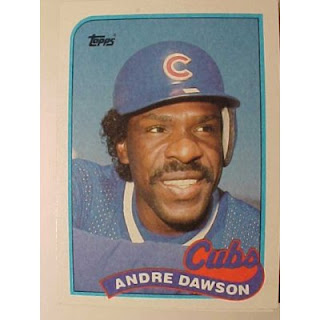 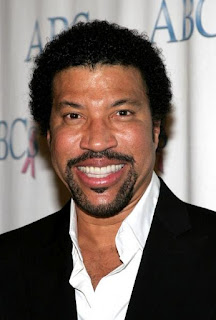 What do you think? Am I crazy or right on? Let me know -- and if you have your own "Star Cards" candidates to offer up, bring 'em on!
Posted by Saul Wisnia at 12:55 AM 1 comment:

Two great Tim Wakefield stories you probably have not heard 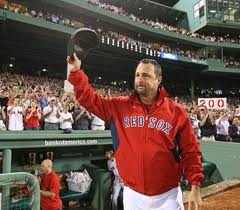 Since it appears that the Tim Wakefield era in Boston may be nearing its last hours, I thought it might be an appropriate time to tip my hat to one of my favorite all-time Red Sox by sharing two stories that show what kind of guy he is away from the field.

Wakefield came to the Sox in the spring of 1995, when Monica Lewinsky was a new intern at the White House and Jose Canseco was taking aim at the Coke bottles atop the Green Monster. Everybody knows what Wake did that summer -- starting his Boston career with a 14-1 mark and leading the Sox into the playoffs -- and even when his stats were far less gaudy in the 17 years that followed, he was a very valuable guy to have around. He started, closed, pitched long relief -- whatever the team needed. 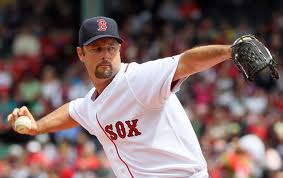 In October of 2004, in the dismal final innings of Game 3 of the ALCS, I was among those shivering from behind the home dugout as Wake took one for the team and ate up precious innings during a 19-8 Yankees blowout. Those of us left when that game ended gave him a standing ovation, and by giving up his Game 4 start so others could rest, Tim paved the way for the eight straight wins that came next.

But you know all that stuff. Here's what you might not know. A few months later, the World Series trophy made one of its first stops on its all-New England winter/spring 2005 tour at Dana-Farber Cancer Institute (DFCI). The Red Sox and Dana-Farber's Jimmy Fund charity have a relationship going back nearly 60 years, which I've been lucky enough to be part of since '99 as a DFCI staff member. This was one of my greatest memories from that long tenure, for it was Wakefield who came to the hospital bearing the trophy. I was one of his tour guides as we strode onto a back-entrance elevator, and a few minutes later emerged in the Jimmy Fund Clinic -- surprising many pediatric cancer patients who were waiting for shots, chemotherapy, and other treatment. 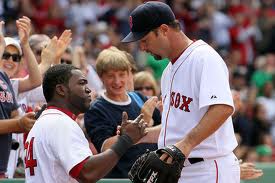 For a few minutes these kids got to forget all about their cancer, as Wakefield walked around the room slowly and bent down so every patient no matter how small could get a good look at the trophy and his face. I've seen dozens of celebrities work this same room, and most of them go through quickly with a smile and a wave. Tim took time to stop and make every child and parent feel like he really cared about them. The youngest kids didn't even know who he was, but he was a big smiling man with a shiny trophy, so they were happy.

We expected the visit to end after this, but Wakefield asked if he could stay and visit with adult patients as well. This time there were some tears among the smiles, as people who had waited 20, 30, 50 years or more for a Red Sox championship suddenly had a once-in-a-lifetime chance to thank one of the guys who helped make it happen. It certainly wasn't how they expected their day at the hospital to go.

Our photographer took dozens of photos, of course, but as is our policy I stood out of the way no matter how tempting it was to sneak into the frame. After all, I had waited 37 years myself for a World Series title. Wake must have sensed this, for after he was finally done shaking hands and doling out hugs, he was about to breeze out to a waiting Town Car when he turned around and said, "Hey, do you want a picture?" He didn't have to ask me twice, and just like that I had my own memento from that memorable morning. 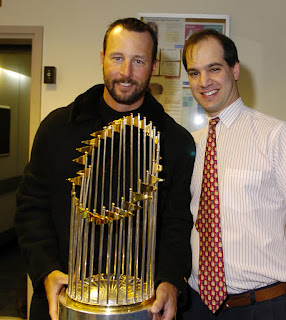 Fast forward to the summer of 2008. The teenagers from the Jimmy Fund Clinic were taking their annual baseball  road trip to see the Red Sox play away from Fenway -- this time in Chicago's U.S. Cellular Field. These trips are a chance for kids to share laughs and war stories with peers who know what they are going through, because they're going through it as well. Baseball, like cancer, is a common bond.

As is usually the custom, the teens came out to the ballpark early to meet with some Sox players before batting practice. Wakefield was always one of the guys who made the most time for kids during these sessions, and this day was no exception. He walked over to the railing separating the stands from the field and started chatting with the young fans. 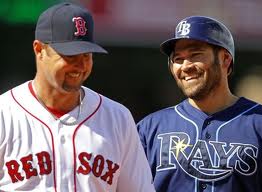 Suddenly, out of the corner of his eye, he saw a bald-headed kid with crutches hopping on one leg about 10 rows back. It was clear that this boy, who had lost a leg four months due to bone cancer, was not going to be able to traverse down the steep stairs needed to meet Wakefield and his other heroes. Again Tim did what came naturally -- he vaulted over the railing into the stands, ran up the stairs, grabbed the grinning 15-year-old, and literally carried him down on his back to the front row so he could hang with his friends and the players. Wakefield went just 10-11 that summer, but that day he was Sandy Koufax and Walter Johnson wrapped into one.

"Every time I walk out to the mound and see that Jimmy Fund emblem on the Green Monster, I am reminded of the special role the team has played in helping fight cancer since Ted Williams was visiting with patients at Dana-Farber back in the 1950s," Wake once told me. "I'm proud to be a part of it." It certainly always showed.

So now it might all be over -- with Wake stuck on 186 Red Sox wins and apparently destined to finish runner-up to Clemens and Cy Young (tied at 192) atop Boston's all-time victory list. It's frustrating to think that for many fans, their last memories of the ancient knuckleballer will be his long, painful march to his 200th career win last year and his one unfortunate quote in nearly 20 years (one I am guessing may have been taken out of context anyway). They should remember all the good days he had while representing Boston with class and guts, and also know that when it came to delivering off the mound, Wake was in a league of his own. 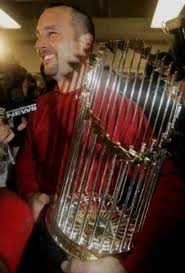 Posted by Saul Wisnia at 3:31 AM No comments: