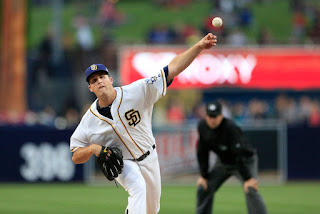 First off, as many others have noted, top pitching prospects seldom meet expectations -- and the younger they are, the riskier they are. The minor leagues and high school athletic departments are filled with can't-miss guys who did. 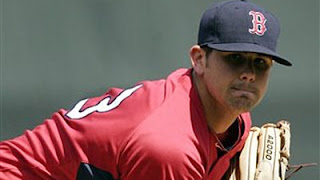 How about Craig Hansen, the Sox' first-round pick in 2005? He was supposed to take over as closer, but turned in a 6.15 ERA in parts of three seasons with Boston -- and was out of the majors by 2009.

Yes, Jon Lester and Jonathan Papelbon were prospects that turned out fine, but don't forget that neither was originally a first-round pick. Pap, in fact, was a fourth-rounder. And for every one of those guys, there are dozens more stocking the shelves at Staples.

So whatever Baseball America says about Espinoza, this is a deal worth making. In fact, even if Espiona DOES turn out to be terrific, it's worth it. 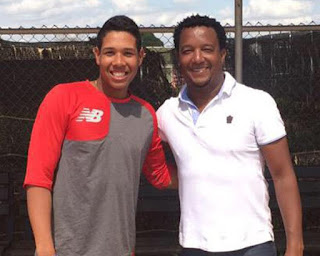 If Espinoza is the next Pedro, so be it.

Picture the scene: the Red Sox are playing the Giants at Fenway Park in late October, a rematch of the 1912 World Series. David Ortiz, after smashing 42 home runs in his final season, caps his Red Sox career with one more chance to deliver in the clutch for Boston.

If the Red Sox hang onto Espinoza, the chances are very good that the last game Ortiz will play for the Red Sox is on Oct. 2 against the Blue Jays. Those of us who were there will always fondly recall Carl Yastrzemski's last game in 1983, but we would have gladly swapped it for a chance to see Captain Carl go out in a contest that mattered -- not on a last-place club.

Ted Williams homered in his final MLB at-bat for the 65-89 Red Sox of 1960. Think he would have traded it for a chance to face the Pirates in the World Series? You better believe it.

Unless Big Papi changes his mind, this is his last go-around. The Red Sox have a lineup that can compete with any team in baseball, and in David Price, Steven Wright, and Rick Porcello have three starting pitchers who they should be able to count on in the second half. They need a fourth, however, to have a chance at the postseason.

Pomeranz gives them that chance. Espinoza may be the bigger winner in the long run, but if the Red Sox want a chance to help their greatest clutch hitter finish his career in Bill Russell, Ray Bourque, or John Elway championship style, they needed to make this move. 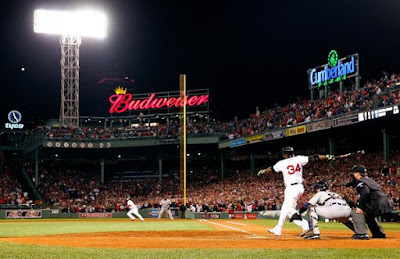 Ortiz deserves one last shot -- and so do the fans.

Posted by Saul Wisnia at 3:52 PM No comments: 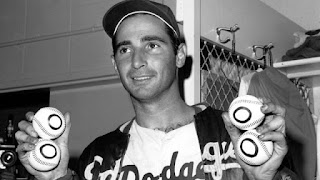 What's this .097 hitter have in common with Ortiz?

He's not a pitcher, he's not a Dodger, but the final months of David Ortiz's career are more closely mirroring those of Sandy Koufax than Ted Williams.

Long before Ortiz hit his 522nd lifetime home run on July 1 to pass the total hit by Williams, people were linking the two Red Sox icons. No less an authority than Carl Yastrzemski has called them the two greatest players in franchise history, and all but die-hard Yaz fans would agree.

When it comes to swan songs, however, the comparisons don't measure up. Ted played his final year for a moribund Red Sox team that finished 7th in the American League, and his 29 homers and .316 average meant nothing beyond padding his Hall of Fame statistics. He gave fans some final thrills at age 42 -- including, famously, a bullpen blast in his last at-bat -- but the Fenway stands that day and many others were largely empty. 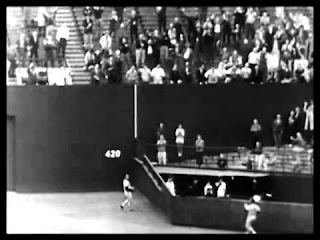 Ortiz is playing under far different circumstances. The Red Sox near the All-Star break in the thick of the AL East and Wild Card races, meaning each Big Papi hit -- even, in one memorable case, a game-saving triple -- has far more importance. On a team filled with budding superstars, it is still Ortiz opposing pitchers fear most in crunch time. Fenway is regularly jammed to capacity with demanding Boston fans.

Whereas Williams was truly a lion in winter during his final season, emerging from hibernation to accumulate just 310 at-bats, Ortiz is playing nearly every day and leads the AL in OPS. True, he has yet to take the field on defense, but what he's doing at the plate is still remarkable for a 40-year-old. One could make a strong argument that Big Papi has been the league MVP over the first half-sesaon, and he is slated to start at DH for the AL in next week's All-Star Game. 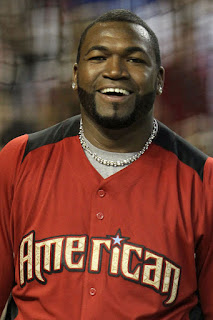 It's enough to make a guy change his mind about retirement, but Ortiz insists that won't be the case. He is too proud and too smart to chance playing one year too long and leaving fans with a less-then-flattering image of a .220, 12-homer campaign. Plus, in addition to the normal aches that can hamper a ballplayer of his age and size, he has severe pain in his feet  that clubhouse onlookers confirm he hides behind his gregarious persona.

Here's where Koufax comes in.

Fifty years ago, the Dodgers hurler dubbed "The Left Hand of God" faced his own physical challenges. Although the he was just 30 in 1966, Koufax's arthritic left elbow caused him constant pain on and off the mound. His arm remained bent at a 22.5-degree angle between starts, and he had suits specially tailored to hide the deformity, Doctors warned him that he could permanently damage his arm by continuing to hurl 300 innings a year. 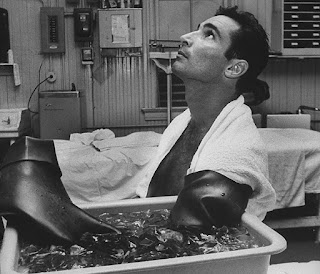 But, like this year's Red Sox, the Los Angeles Dodgers of '66 were a contending team -- in fact, the defending World Series champs -- in a tight pennant race. There were other strong players on the club, and two future Hall of Fame pitchers in Don Drysdale and rookie Don Sutton behind him in the rotation, but Sandy was clearly the star. As with Ortiz, nobody performed better when the pressure was greatest.

This stayed true down the stretch in '66. The pain never lessened, but Koufax kept winning -- going 8-2 with an 1.78 ERA and 8 complete games in his final 11 starts. On the last day of the season, with the National League championship on the line, he beat Phillies ace Jim Bunning with a 10-strikeout performance on two days rest.

In addition to helping the Dodgers to the World Series, where they lost to Baltimore, Koufax led the league in wins (at 27-9), ERA (1.73), strikeouts (317), Bar Mitzvah invitations, and marriage proposals. He won his third Cy Young Award in four years, and only a career season from Roberto Clemente denied Sandy NL MVP honors as well.

Then, shocking the sports world, Koufax walked away. In a hastily called press conference, he stated that "I've got a lot of years to live after baseball and I would like to live them with the complete use of my body."

There will be no such surprise announcement from Ortiz. Everybody knows he is retiring. But, like Koufax, and unlike Williams, Big Papi is doing so on a team that could very well be playing important games in September -- and maybe October.

In the end, that's far more important than any home run. 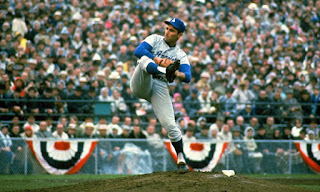 Posted by Saul Wisnia at 2:23 PM No comments: