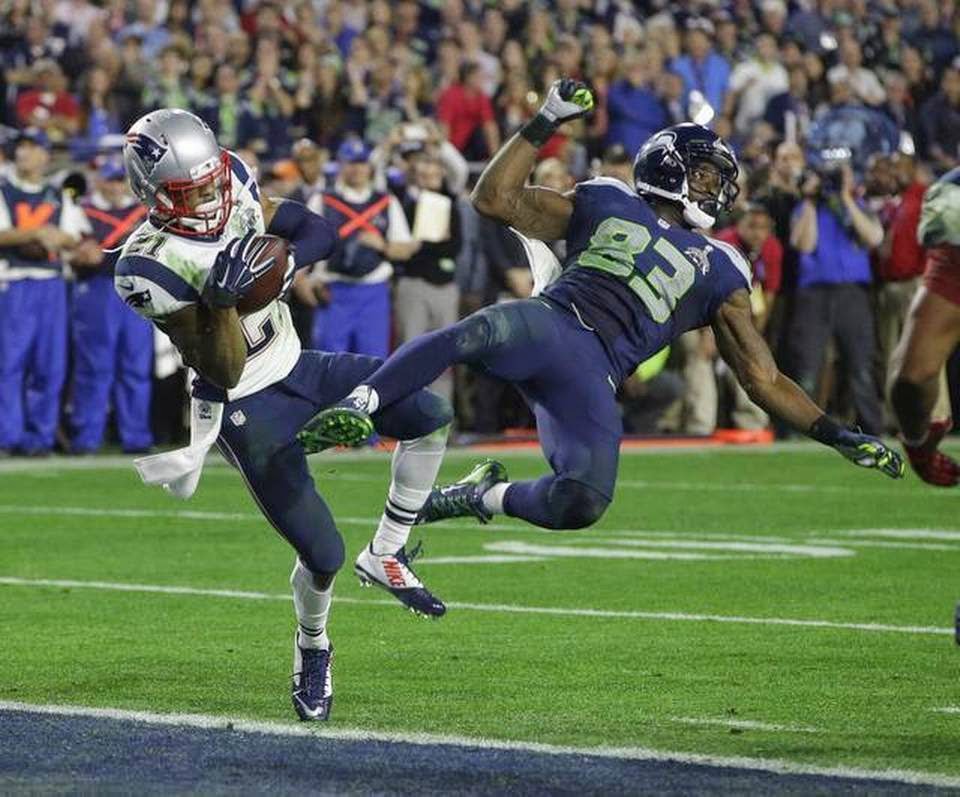 The Sox equivalent? That goes back a ways.

For the past week, Boston sports media pundits from Felger and Mazz to Dan Shaughnessy to Steve Buckley have weighed in about which past Boston sporting events are worthy of comparison to Super Bowl XLIX.

The way last Sunday night's game unfolded -- with the Patriots trailing Seattle 24-14 in the fourth quarter, rallying to go ahead in the last two minutes, having that lead all but stolen back in the final MINUTE, and then turning the table a final time on the most unlikely of goal-line interceptions -- made it an instant classic. New England's 28-24 victory sealed the legacy of Tom Brady and Bill Belichick, and assured rookie cornerback Malcolm Butler, author of the Pick-Heard-'Round-the-World, that his days working at Popeye's were over for good.

Seattle Coach Pete Carroll was immediately lambasted for not calling a second-down running play for bruising back Marshawn Lynch or mobile QB Russell Wilson, a move which brought logical comparisons in these parts to Red Sox managers Grady Little and John MacNamara. (If you have to ask, you're reading the wrong blog.) I admit conjuring up images of Mac and Grady myself as the euphoria turned to disbelief over why Carroll chose to throw in that situation. 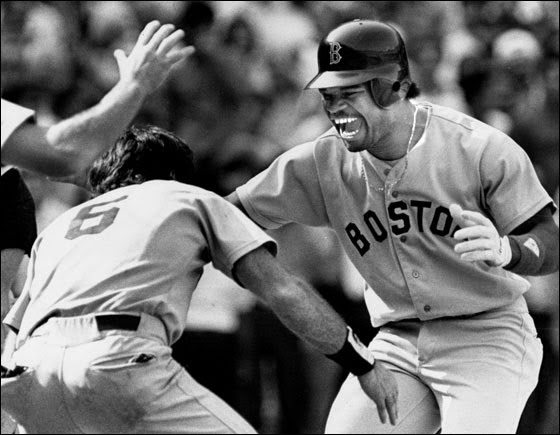 Great, but not the best.

Butler, in contrast, was the game's unlikely hero -- a Dave Henderson or Dave Roberts in shoulder pads. But while Hendu's homer in the 1986 ALCS and Roberts' steal in the 2004 showdown with the Yankees proved pivitol points in thrilling victories, and ranked at or near the top of most of the lists this week, neither sealed a victory or a championship. Both, in fact, came in the fifth game of seven-game series. 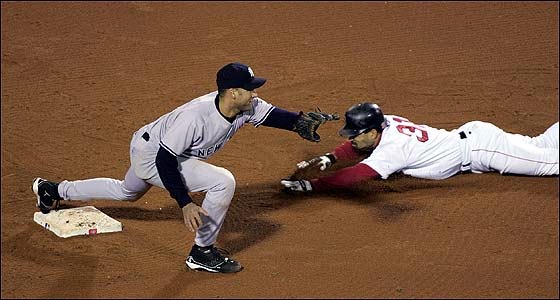 To truly match the ramifications of Sunday's game, you have to go much further back in Red Sox history. In fact, the only time the Sox clinched a world championship in the final moments of an all-or-nothing contest was during Fenway Park's first postseason: the 1912 World Series between Boston and the New York Giants.

Like this year's Super Bowl, the Fall Classic of '12 had everything needed to generate fan and media buzz. There were two ace pitchers -- classy veteran Christy Mathewson of the Giants and young fireballer Smoky Joe Wood of the Red Sox -- filling in the Brady and Wilson roles. A legendary boss occupied one dugout (manager John McGraw of the Giants as Belichick) who an eager adversary (player-manager Jack Stahl of the Sox as Carroll) hoped to topple. 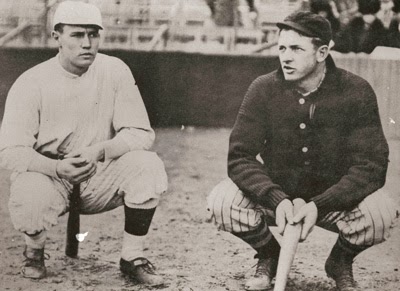 Wood and Mathewson: Calm before the storm

There were even battling crowds to throw  into the mix. The fierce rivalry between New York and Boston baseball fans was already well established, and the Red Sox "Royal Rooters" had their own brass band and were led by Boston Mayor John "Honey Fitz" Fitzgerald -- grandfather of future president John F. Kennedy.

The Giants were heavy favorites entering the Series, but through seven games the Sox had managed to split six contests with one darkness-induced tie. For the eighth and deciding game at Fenway, Mathewson faced Boston's Hugh Bedient on a cold, damp afternoon. Wood, who had pitched the day before, was ready in the bullpen.

New York went up 1-0 in the third inning, but failed to capitalize on several chances to expand their lead. Mathewson was hurling a shutout into the seventh when Stahl manged to bloop a single to center and came around to score on a double down the left-field line -- which then included a sloping hill directly in front of the ad-plastered fence. 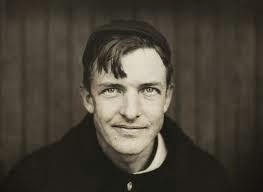 It was still 1-1 after nine innings, and the skies were darkening as the Giants came up in the tenth. Wood had relieved Bedient, and New York got to him on a Red Murray double and a run-scoring single by Fred Merkle (remember the name). The final out of the frame was a hot shot to the mound off Wood's hand; Smokey Joe managed to get the out at first, but Stahl was forced to pinch-hit for his ace (a .290 batter) leading off the bottom of the 10th.

Clyde Engle, a weak slap-hitter, was overmatched against Mathewson. He hit a fly ball to center, which Fred Snodgrass settled under for a seemingly easy out -- until it popped out of his glove. Engle took second, and got to third on a deep line drive by Harry Hooper which Snodgrass managed to spear for a then-game-saving play.

The tying run was now 90 feet away. Another weak hitter, Steve Yerkes, was up next, but a rattled Mathewson inexplicably walked him. Tris Speaker, the AL's top batsman, now stepped in, and Matty appeared to win the best-on-best battle by inducing a foul pop to the right side. First baseman Fred Merke was closest to the ball, but for reasons unknown -- some reports claimed Mathewson called him off -- it fell untouched. 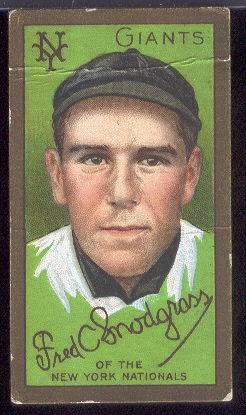 Given another life, Speaker singled in Engle and took second on an unsuccessful throw to third to try and nab Yerkes. Mathewson should have been celebrating a championship by this point, but now was just hoping to get out of the inning with a 2-2 tie. He walked Duffy Lewis to load the bases and set up a force out at home, but Larry Gardner's fly ball was deep enough to score Yerkes with the series-clinching run. 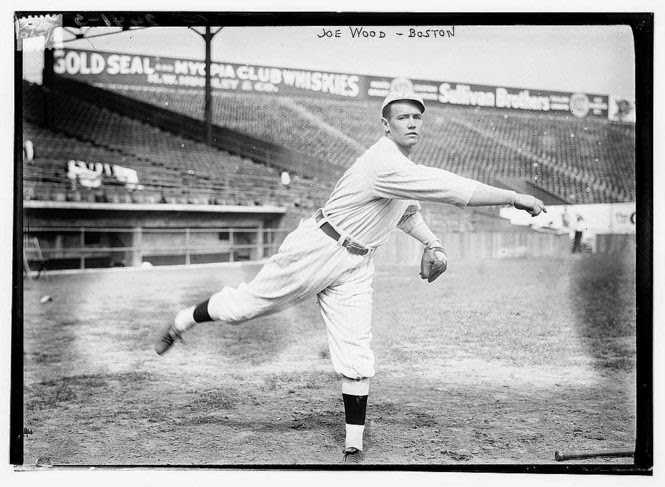 The two New York miscues would haunt those who made them for the rest of their careers, with "Snodgrass' Muff" entering the baseball lexicon. It's too early to tell if Carroll will ever be exonerated for having Wilson throw from the one-yard-line, but unless he wins another Super Bowl or two it will almost surely be in the headline of his obituary -- as was the case with Snodgrass.

Gardner's game-winning hit was not a stirring play like Butler's interception, but, as Belichek would say, it got the job done. It also helped spark a Red Sox dynasty, as Boston claimed additional World Series titles in 1915, 1916, and 1918 with the help of a young pitcher named George Herman Ruth. 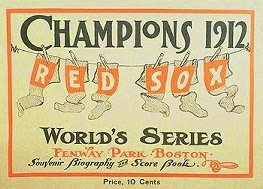 Gardner was around for three of the titles, while Hooper was on board for all four -- a record he now shares with Tom Brady for the most world championships won by a Boston pro athlete not on the Celtics (who, with 11 titles between 1957-1969, had a full roster's worth of players achieve the feat). You can win yourself a few bar bets with that one.

Now, it would seem, the pressure is on David Ortiz. As the sole member of the current Red Sox team who was on the 2004, ,2007, and 2013 champions, Ortiz can match Brady and Hooper with his next title.

One thing is sure -- it won't take him an eight-game series to get it. 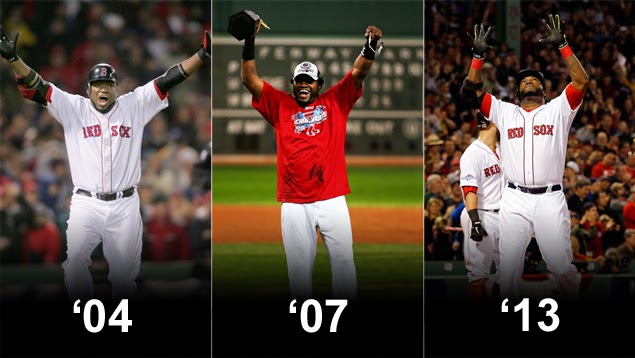 Brady now has four -- how about Papi?