In Elite Era for RF, All-Star Mookie Betts Holds His Own 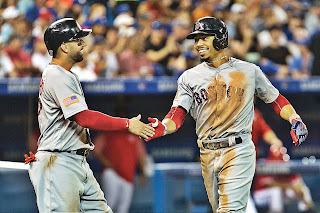 Betts was all smiles north of the border.

Does Mookie Betts belong in the same class as Bryce Harper and Aaron Judge when talk turns to baseball's top right fielders? Ask Blue Jays fans who had their Canada Day weekend ruined by the newly-named All-Star.

After performing for two months this season below the Silver Slugger offensive standard he set as the American League MVP runner-up in 2016, Boston's five-tool standout has heated up -- capped by a 4-for-6, 2-homer, 8-RBI performance Sunday as Boston completed a weekend sweep of the Jays. His efforts Sunday even gave Betts a franchise record: most RBI in one game by a leadoff hitter. He leads the AL with 27 doubles, and if you factor in his 15 stolen bases, he's now on pace for a 30-homer, 30-steal, 100-RBI season.

It would be ridiculous to claim anybody other than Judge was the league's top player for the first half of 2017, and even the biggest Red Sox fan would admit Mike Trout was a deserving MVP pick over Mookie last year.

But in an era stacked with outstanding right fielders like Judge, Harper, Giancarlo Stanton, and Toronto's Jose Bautista, Betts is every bit as deserving of an All-Star nod as the rest.

Now Joe Dombrowski needs to figure out how to sign the 24-year-old superstar to a long-term contract. Betts has been working on one-year deals so far, but this could lead to an astronomical payday when he's free agent-eligible after the 2020 season.

Not since the Aaron-Clemente-Kaline days of the 1960s has the right field position been this stacked. Those Hall of Famers all played at least 15 years with their original team, and it would be great if Betts could too. 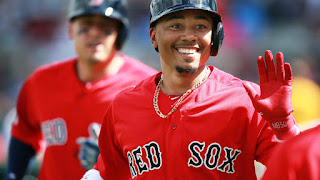 Posted by Saul Wisnia at 9:15 AM No comments: