A letter to Mookie Betts: Think of your legacy, and learn from Mo Vaughn 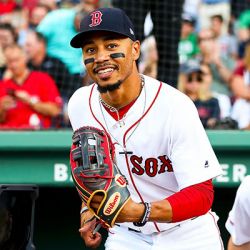 Dear Mookie:
I'm sure you don't remember me. We've met a few times at Jimmy Fund events and the Red Sox Winter Festival. Mostly I've just watched you from afar, building your resume as the best all-around Boston baseball player of the 21st century. It's been a joy to see the skills and enthusiasm you bring to the ballpark each day, and the great work you do away from it.

I am writing because I want you to consider something very strongly during this important time in your life: How do I want to be remembered? If you want people to think of you as a great athlete, congratulations, you've already got that. But if you want them to remember you as one of the all-time greats -- one of the handfuls of guys who are identified as baseball icons forever associated with a time and a place -- then you need to do something else.

Don't just think about the money. 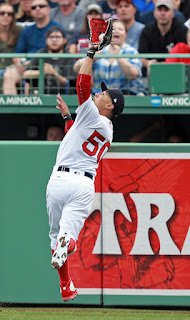 Yes, that's easy for me to say -- it's not my money. And yes, there is a lot of money to make. An obscene amount. You've worked hard to get to the place where you can command it. It is your right, and if others who do not possess your overall skillset are getting X amount, you deserve X+Y. I get it all.

I know there are other factors. The Red Sox want to be under the luxury tax, they have big contracts they are trying to unload like David Price, etc, etc. But if you went to John Henry and said you wanted to do what it took to stay, you could make it happen. He would make it happen, I have to believe it. This is not the time, in the wake of the Alex Cora fiasco, for him to be making unpopular moves that he doesn't have to make.

And here's the thing: even if you don't get THE MOST money you can, you could still get a ton of it and stay in Boston. Then you would have a ton of money AND something you would NOT have elsewhere:

None of us knows what the future holds. The tragic events in California last Sunday are a horrible reminder of that. We could be on top of the world one minute and then gone the next. But there are some things we can control. In Boston, you know you have a great situation. You are the face of the franchise, the best and most beloved player in the best baseball city on the planet. You have the comfort zone that comes with continuity, and that leads to consistency. Even if you get more money to go elsewhere, there is no guarantee that you will play as well or be as happy there. In Boston, sure, you could slip, but the chances are much greater you would continue at your current level than if you have to deal with a new environment, new teammates, new fans, and everything else. 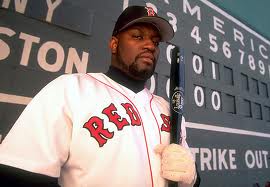 Mo before the money.

We had an excellent ballplayer in Boston during the 1990s named Mo Vaughn. You've probably met him -- great guy, a real fan favorite, very charitable -- a lot like you. He couldn't hold your glove, but he was a terrific hitter. Vaughn was the face of the franchise and leader of the clubhouse. Big Papi-like in that regard. He OWNED Boston. Then he left all those sure things and went to LA, where it all went downhill. The fans didn't care, he got hurt, he didn't feel the passion, and his numbers suffered. He went from a Hall of Fame trajectory to a guy who couldn't stay on the Cooperstown ballot beyond the first year.

All for some more money. 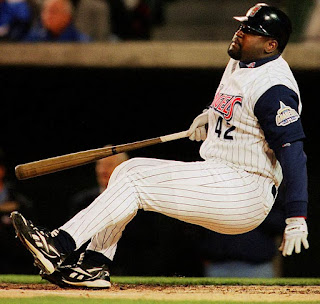 Mo after the money.

The rumors are the Red Sox have offered you $300 million for 10 years. That's a LOT of money, even by baseball standards. Let's say you can get $350 million or even $400 million in LA or somewhere else for 10 years. Do you KNOW everything else there is going to be as good for you as it has been in Boston? Sure, it COULD be, but do you KNOW it?

You might be saying "Wait a minute, this isn't my fault, it's John Henry's. I told him I wanted to stay here." I don't doubt you did. But he was only willing to go so far based on the level your agent set. There was no wiggle room below it. You could create that wiggle room by coming up with a figure that while maybe not what you COULD get, would still be enough to have a very rich life fiscally and continue what is a very rich professional life. No surprises.

These are troubled times in Boston. The whole Alex Cora thing is awful for everybody involved. This may be a challenging year ahead. But if you stay here, and then continue on for another decade, you can be remembered as the man who bridged the gap -- who stayed the Face of the Franchise and helped the team and MLB overall through its rough patch.

Here's one more thing to think about.

If you stay, you have a chance to be one of the handful of baseball greats who spend their entire career with one team. This is an extremely select list in the free agency era. Think Tony Gwynn, Robin Yount, Derek Jeter, Chipper Jones. There is something very, very special about the way these guys are held in the public consciousness, and I believe one reason they all displayed such consistent excellence over such long periods is that they did not upset the apple cart by switching to another organization half-way through. They knew they had something good where they were, so they stayed put. I am guessing they also make a lot more in endorsement money than if they had a split career. 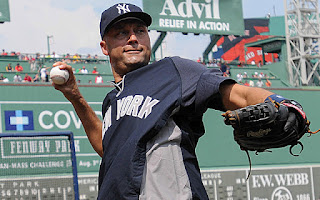 You could be Boston's Derek Jeter.

Look at Pedroia. He signed a team-friendly deal and has gone through injuries for much of it, but I can guarantee he will be remembered in Boston as one of the all-time great Red Sox. If he went elsewhere, and THEN got hurt, he would be looked at more like a Jacoby Ellsbury. Great player at his peak, but a guy who chased the money.

You only get once chance at this decision. I know you are not just another athlete in it for himself. Your actions on the field and off show that. Heading downtown to hand out food to homeless folks without the cameras whirring -- jerks don't do stuff like that. Yes, maybe John Henry SHOULD offer you more money -- maybe he even WILL in the end, before a trade is done.

But it doesn't look that way. It looks like he's gone as high as he's willing. So it's really up to you.

You've got a great thing, and it can continue for a decade or more -- and carry you with it into history.

See you in April.

p.s. In LA the fans come in the third inning and leave in the seventh. Just sayin' 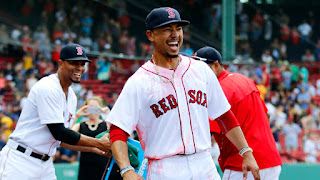