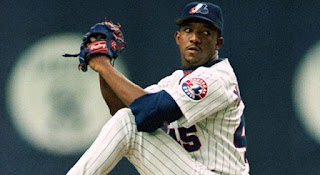 Pedro earned his stripes in Montreal.

For Red Sox fans it was a single sound byte in a month-long stretch of magical, must-see video. Most probably didn't even hear it above all the screaming in living rooms, dorm rooms, and bars across New England. Fewer would recall it later.

Over the border, however, folks took notice -- and never forgot.

Pedro Martinez had just helped the 2004 Red Sox win their first World Series in 86 years. The triumph climaxed a seven-year run of domination by Pedro unseen before or since: a 2.45 ERA and 0.978 WHIP in regular-season play during an era when steroid-fueled sluggers ripped other pitchers to bits.

In his and Boston's crowning moment of glory, a champagne-socked Pedro took a moment in the raucous Boston clubhouse to thank the Montreal Expos fans that had embraced him as he grew to stardom with their team in 1994-97. The cash-strapped Montreal front office had sent Pedro to the Red Sox in a one-sided deal after his Cy Young season in '97, knowing it couldn't resign him. Now they were losing far more than a pitching ace.

Always an afterthought in hockey-crazed Canada, and saddled with a dismal stadium that citizens voted down replacing with a publicly-funded ballpark, Les Expos were moving south to become the Washington Nationals.

"I would like to share this with the people in Montreal that are not going to have a team anymore," said Martinez. "My heart and my ring is with them, too." 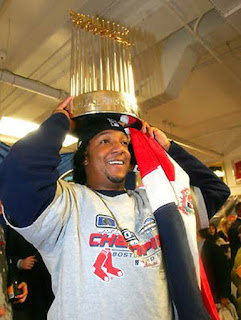 He was speaking to a single Montreal reporter, but the 12-second clip soon went worldwide. The classy comments were Pedro's way of thanking those who had believed in him. Tommy Lasorda and the Dodgers may have thought Martinez lacked the strength and size to be a starter (swapping him to Montreal even-up for Delino DeShields), but Expos manager Felipe Alou and his organization gave Pedro the chance to prove he could. Now the country he departed after four years and a .625 winning percentage is thanking him back with its ultimate honor.

On June 16, Martinez will be inducted into the Canadian Baseball Hall of Fame, along with former Blue Jays outfielder Lloyd Moseby and baseball historian William Humber.

In a conference call with reporters after receiving the news on Feb. 1, Pedro expanded on why the honor meant so much. After his 1994 trade from the Dodgers, where his big brother and teammate Ramon had always looked out for him amidst the craziness that is LA, Martinez established his independence in Canada.

"At the time, I didn't know what to do in the streets," said Pedro. "Montreal helped me to become a man, because not only was I on my own, but doing it in a place where I felt really, really safe and loved by the people and embraced by the people that did not care what color you were, what you were wearing, how much money you were making. They were there to make you feel comfortable. So Montreal means the world to me." 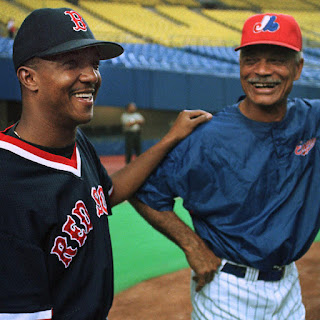 Martinez always felt, as did many of his teammates at the time, that the Expos could have won the 1994 World Series. They were in first place with the best record in the MLB on August 12 when the remainder of the regular season and entire postseason were canceled by the 1994 baseball strike. Pedro, in his first year with the club, was 11-5 and on a five-game winning streak when the strike hit.

That's why when he finally won his first championship a decade later, Pedro wanted Montreal fans to know he wished it had been with them. His Hall of Fame plaque in Cooperstown may include a Red Sox hat, but he will always be remembered warmly by Canadians as more than just a baseball star. His brilliance went beyond the numbers, on and off the field. 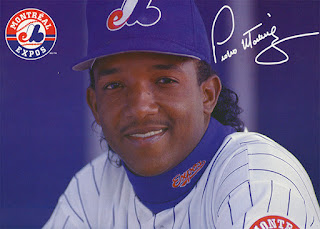