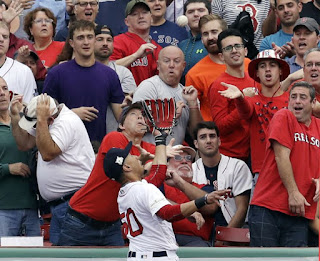 First Mookie Betts single-handedly kept the Red Sox alive in Game Three of the ALDS yesterday at Fenway Park with his glove, and then he unknowingly -- except for a few of us in Section 15 -- sparked an offensive explosion that propelled Boston to a 10-3 victory over the Astros and a chance to square their best-of-five series today.

Fans were still streaming into Fenway for what could be Boston's season finale when Houston took a 3-0 lead in the first inning against Sox starter Doug Fister. After the Astros got two men on in the second, chasing Fister, Josh Reddick hit a sharp fly off Joe Kelly towards the right-field corner. Betts sprinted after it with his usual graceful strides, and just as the ball appeared headed for the first or second row, he reached out and grabbed it with a basket catch reminiscent of Dwight Evans' robbery of Joe Morgan at nearly the same spot in Game Six of the 1975 World Series. 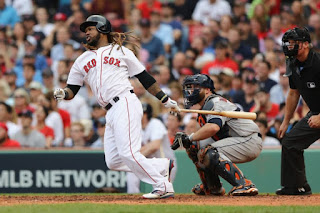 The play ended the inning; rather than being down 6-0, the Sox were still in striking range. They got one run back in the second, and then in the third Mookie was at it again -- sprinting with his back to the plate and snaring an Alex Bregman smash over his shoulder just in front of the warning track (ending the inning and another Houston scoring threat).

As Betts jogged in after this latest catch, Boston fans offered the reigning Gold Glover a huge ovation. Rachel and I, who had scored terrific seats in the first few rows of the lower grandstand behind the Red Sox dugout, high-fived our neighbor (and new Fenway friend) Nancy (not to be confused with our longtime friends Nancy and Nancy, aka "The Women of Section 30"). 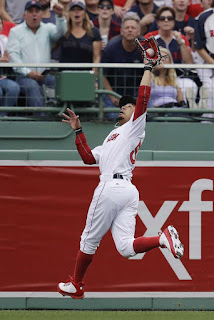 I was about to get much better acquainted with this new Nancy. In the bottom of the fourth, Betts hit a high foul ball toward our section. It looked at first to be off to our left, but then at the last moment it curved and slammed down directly into the empty seat between me and Nancy (who had nicely moved one over from her "real" seat earlier to give me extra legroom). The ball rolled under the seat, and as I reached down to grab it, Nancy's hand sneaked in at the last moment to nab the prize fair and square.

Rachel was momentarily disappointed, until I explained that the only way I could have grabbed the ball on the fly would be to have flung my beloved scorebook one way and shove Nancy the other. Plus, I said as I pointed to the band around Nancy's left hand, she appeared to have a wrist injury that I didn't want to harm further in our beneath-the-seat scramble. 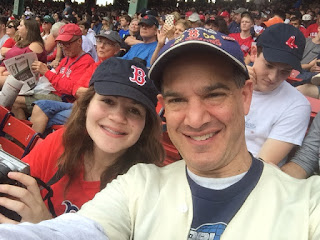 "I understand, Dad," Rachel said, in that 13-year-old way that you know is masking disappointment with a budding maturity so as to not wound her father's bruised ego. "We'll get another one."

Betts struck out on the next pitch, after which came a moment both comical and magical. I learned that Nancy wasn't injured at all -- what I thought was a brace of some sort was actually, she explained with a laugh, a wrist purse in which she was keeping her keys. She also told me she was especially excited about the ball because of a near miss years before. While at a game with her son in these same seats, she had a foul ball land directly in her beer, knock it from her hand, and then roll four rows away and out of her life. This was her payback.

It was also the spark to a Sox rally. The next four batters after Betts hit safely, highlighted by a two-run homer from rookie Rafael Devers that gave Boston a 4-3 lead. Nancy showed off her ball to folks around us, and then tucked in between her legs for safekeeping. Perhaps, I wondered, my near-treasure was meant to be hers -- and meant to be a talisman. 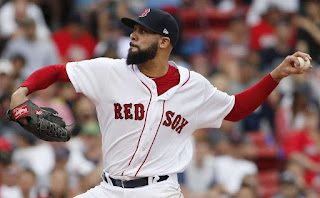 The Price was right for four shutout innings.

The redemptive David Price kept the Astros at bay over the next four innings, but Boston could not add to its one-run lead. A tenseness hung over Fenway, which in our row nearly became a panic after Nancy left to make a concessions run. Her husband Glenn suddenly jumped up, wild-eyed, and began running up and down the aisle peering into each of the five rows ahead of us.

"What's wrong, did you lose your keys?" I asked.

Thankfully the beer-soaked sphere was retrieved, dried, and placed snugly into a cup holder by the time Nancy got back. 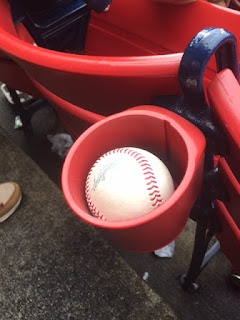 When she heard about the near calamity she gave Curly a stern but loving look, happy that The Baseball Gods had saved her keepsake. Soon thereafter, the Red Sox batted around in a six-run seventh that put the game out of reach. Betts singled and scored during the outburst, and then added a few more web gems for good measure -- giving him seven putouts overall and the home team a newfound momentum going into Game Four. 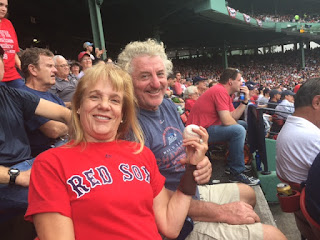 Nancy, Glenn, the ball, and the wrist purse.

Rachel and I exited Fenway on high adrenaline, our perfect day at the ballpark completed, when suddenly a shock came over me not unlike that which had befallen Nancy's husband a few hours before. My keys -- including the pricey remote entry fobs for BOTH our family cars -- were gone. My TILE app (thanks for the Father's Day gift, Michelle) alerted me that they were "in Fenway Park," but we couldn't find them despite a law-breaking sprint back into the park and to our seats.

I would have to wait until Monday morning to call Fenway's Lost and Found, but at least -- thanks to Mookie -- Jason and I would be doing so on a game day. 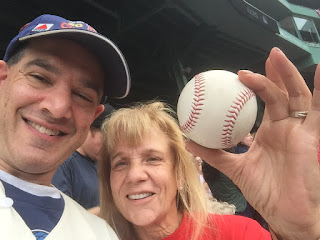 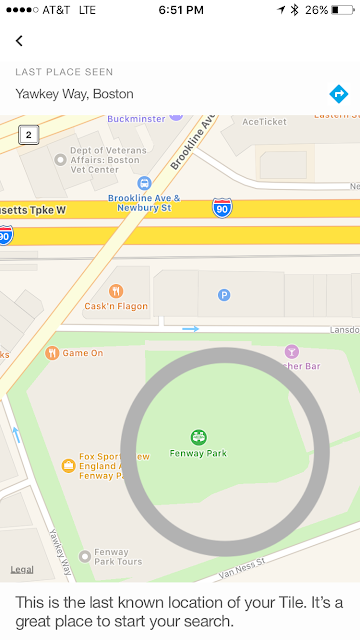