How I learned to love Don Zimmer (even in pinstripes) 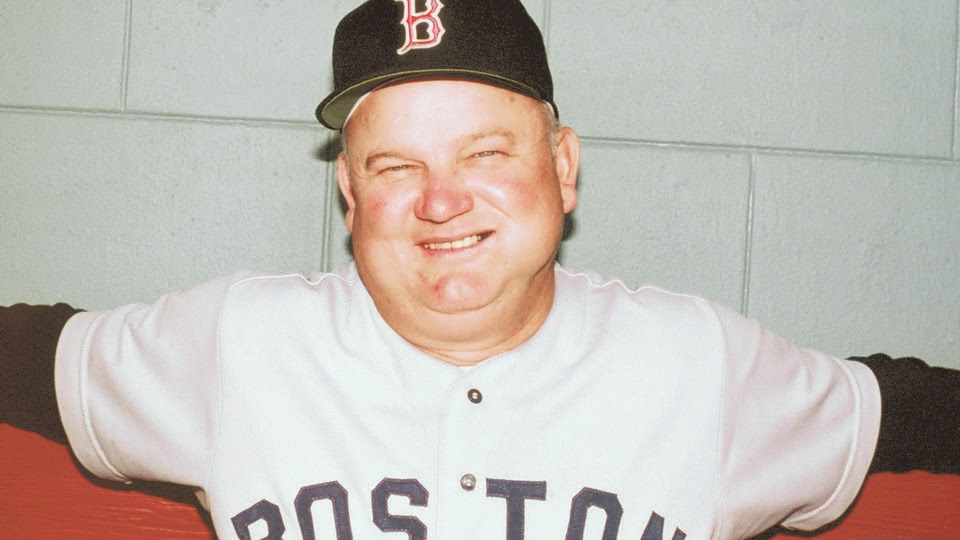 Zim, how his players knew him. (Getty Images)

As children our thoughts and actions are largely influenced by the adults around us. For kids who grew up in New England during the late 1970s, Don Zimmer never really had a chance.

Everywhere we turned, the manager of the Red Sox was getting bashed as an incompetent boob. If we went to Fenway Park, we heard Zimmer booed from the moment he stuck his head out of the dugout. In April of '79 he even got booed at Fenway on Opening Day, an honor usually reserved for politicians -- not guys who led their team to 99 wins the year before.

When we listened to The Sunday Night Sports Huddle on WHDH radio, a rite of passage into mature fandom, we heard Zimmer maligned each week by Eddie Andelman and his co-hosts for failing to make the playoffs with the likes of Fisk, Lynn, Rice, Yaz, and Dewey in his lineup. Callers who mentioned the manager's real name were immediately cut off; "Chiang Kai-shek" was how you had to identify the Boston skipper on The Huddle, and even if we didn't know who that was, we laughed right along with Eddie, Mark, and Jim. 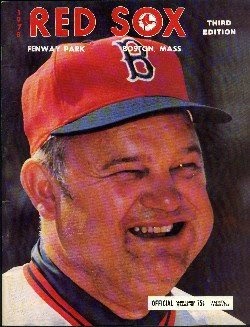 Zimmer looked like a cross between two cartoon characters. His long, muscle-bulging forearms, pudgy, tobacco-filled cheeks, and squinty eyes made him a ringer for Popeye the Sailor Man, while his short, stout torso and legs were more a match for Popeye's hamburger-eating pal, Wimpy. Throw in the regrettable softball-style, V-necked tight nylon uniforms the Sox wore during this era, and it wasn't a pretty picture.

This guy was a sports cartoonist's dream, and since the Boston Globe had one of the best in Larry Johnson we were treated to a steady diet of hilarious images. One of these adorned the office door of my summer camp's  head baseball coach for years, a yellowing reminder of just how silly Zimmer appeared to the world.

For us easily impressionable preteens, the member of the Sox to emulate was lefty pitcher Bill Lee, California cool with his long hair, sharp wit, and funny nickname of "The Spaceman." Zimmer was known around the game, logically, as Popeye, but Lee gave him the moniker most often used by kids and hecklers to describe the manager: "Gerbil."

The anti-Zimmer brigade was often loudest at home, where my stepfather hurled a barrage of insults at the Zenith that he fully expected the skipper to hear. These reached a fever pitch in the summer of '78, when the Red Sox blew a 14-game lead in the AL East and the Yankees roared back to win a one-game playoff at Fenway behind Goose Gossage, Reggie
Jackson, and Bucky "Bleeping" Dent. Today a 99-63 record almost surely gets a team into the playoffs as a Wild Card; back then all it got you was second place and a plane ticket home. 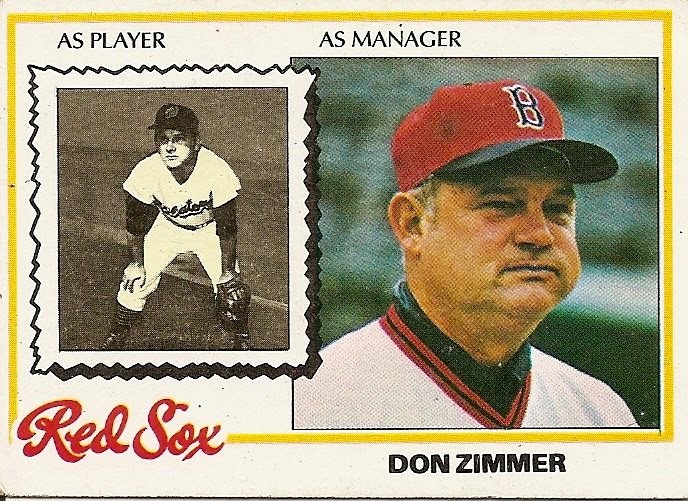 Late in the 1980 season, with the injury-plagued Red Sox limping toward a fourth-place finish, Zimmer was fired. Grandfatherly Ralph Houk took his place, and while the Sox still didn't win anything, the manager-bashing and booing largely stopped. The human punching bag had left town.

Then something happened. As I passed through into high school and college, and learned more about Zimmer's background and reputation around the game, my feelings started to change.

The roly-poly guy who waddled like a Weeble on his trips to the mound had once been a nimble shortstop who stole 60 bases (including 10 thefts of home) his second year in pro ball. Zimmer was one of the best power hitters in the minors and on the fast track to make the venerable Brooklyn Dodgers before he was beaned in a 1953 game and suffered a fractured skull.

For two weeks Zimmer lay in a coma, and doctors had to drill holes in the sides of his head to relieve pressure on his brain. Against all odds he not only returned to baseball, he made the major leagues with the Dodgers a year later. (True to his '70s image, the only fact we knew about this scary incident as kids was that "blockhead" Zimmer had a steel plate in his head.)

He never achieved stardom with the Reese-Robinson-Snider-Campanella Dodgers, but was a valuable role player who had 15 home runs in 88 games at second, short, and third in 1955 to help Brooklyn to its only World Series title. He survived another serious beaning that cost him much of the '56 season, and won a second World Series with the Dodgers in '59 after their move to Los Angeles.

Statistics don't always tell the whole story about a player, and they certainly did not with Zimmer. He hit just .235 with 91 homers over 12 major-league seasons, and upon being traded from the Dodgers suffered in purgatory with dismal clubs like the 1962 Mets and 1963-65 Senators. He lasted as long as he did because he was tough, played hard, and was very well-liked by his teammates. Versatility was another plus; he suited up at every position but first base and center field in the majors, and even caught 35 games with Washington.

After his playing days, Zimmer never left the game. He coached in Montreal, managed the talent-poor Padres in their early years (a job from which he resigned and was not fired, as he'd prove with a letter he carried in his wallet), and came to Boston as a coach under Darrell Johnson. Look closely at the reverie after Carlton Fisk's famous 1975 World Series home run, and you'll see Zim (coaching third) is the first person to congratulate Pudge as he heads to home plate.

Speaking of home plate, Zimmer was married there -- honest. He wed his beloved Jean (nicknamed "Soot") at the dish before a minor league game in '51, and was still with her when he died. 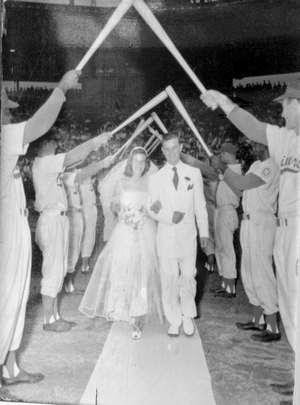 Zimmer's post-Boston journey included a decent managerial stint with the Rangers and a fantastic job at the helm of the 1989 Cubs, capturing an NL East division title and Manager of the Year honors. Amazingly, he even came back to the scene of the crime -- coaching with the awful early 1990s Red Sox under his former Boston third baseman, Butch Hobson. That took guts, and perhaps knowing it, fans gave Zimmer a break from the booing (turning instead on Hobson).

Ironically, the revival of the Yankees-Red Sox rivalry occurred with Zimmer in the opposing dugout as bench coach and consigliere to manager Joe Torre on the four-time World Series champion Yanks of 1996-2003. As Bostonians we hated the Yankees, but it was now impossible to hate Zimmer. Leaning over to whisper to Torre, or breaking into a grin and whacking Derek Jeter on the back after a good play, he looked more like a grandfatherly fan than a guy drawing a paycheck from Steinbrenner. 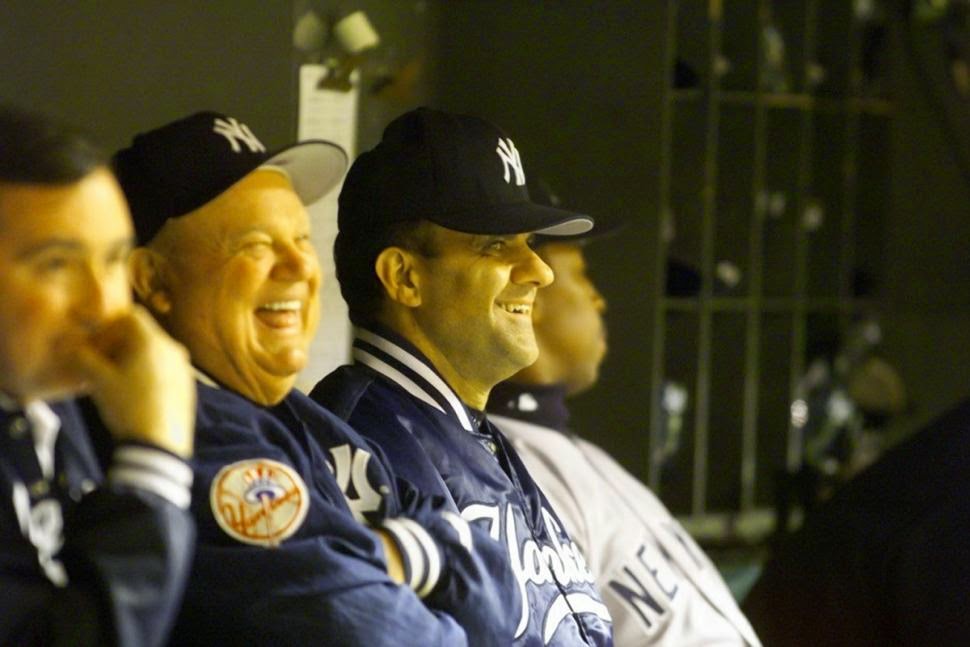 Then there was the moment when Zimmer, angered at Red Sox ace Pedro Martinez for throwing at Karim Garcia's head during the 2003 ALCS, charged across the Fenway diamond to go after the pitcher. A shocked Martinez pushed the 72-year-old coach to the ground, an act which while not malicious in intent left a bad impression on all who saw it. When Zim apologized during a press conference the next day, tearing up in the process, he was the furthest thing from a gerbil. He was more like a teddy bear.

Perhaps appropriately, Zimmer left the Yankees after that season, which meant he wasn't on The Dark Side when the Sox finally broke through in October 2004. He returned to his Florida home and took on various advisory roles with the Rays, changing his uniform number each spring to reflect his years in the pro game. This season it was 66. 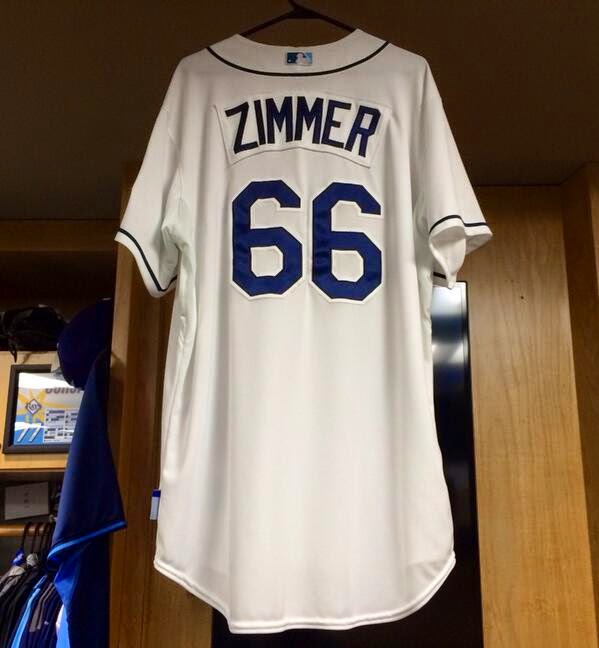 The last of many uniforms.

Three titles in ten years mellowed Boston fans, and Zim claimed he always enjoyed coming back to Boston. We learned he had been listening to the talk shows all those years ago, and it had eaten him up, but that he felt fans had the right to boo him if they wanted. He even rented a house from Bucky Dent one year -- and loved to tell the story of how photos depicting Dent's '78 home run at Fenway hung in every room.

Hearing of his death, I felt like I had lost an old friend -- even though I never got closer to Zimmer than across a crowded room. The tributes came from every corner of the hardball universe.

"I never met anyone was more pure baseball than Don Zimmer," Boston Globe columnist Bob Ryan wrote in a tribute.

"He was, without a doubt, one of the most beloved players on the team," said Vin Scully, Dodgers broadcaster from Zim's days with the club until today. That says a lot, when you think about the guys on that Brooklyn/Los Angeles team.

Sure, he should have rested Fisk more in '78 and taken out Hobson when he had bone chips floating in his elbow. He should have pitched Lee against the Yanks in September (or in the playoff game), but while this may have driven the fans and talk show hosts nuts, his players on the Sox loved him.

Sorry for the boos, Zim. We were just kids. We didn't know better. 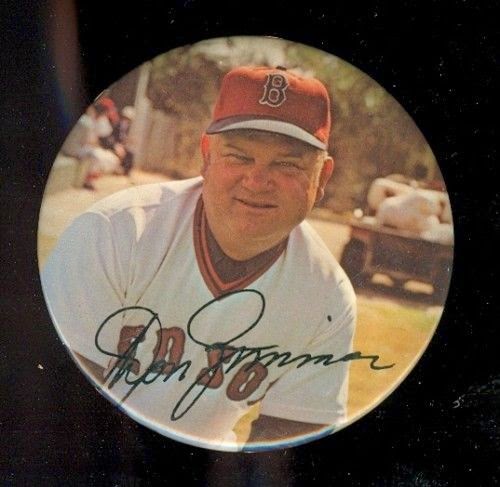