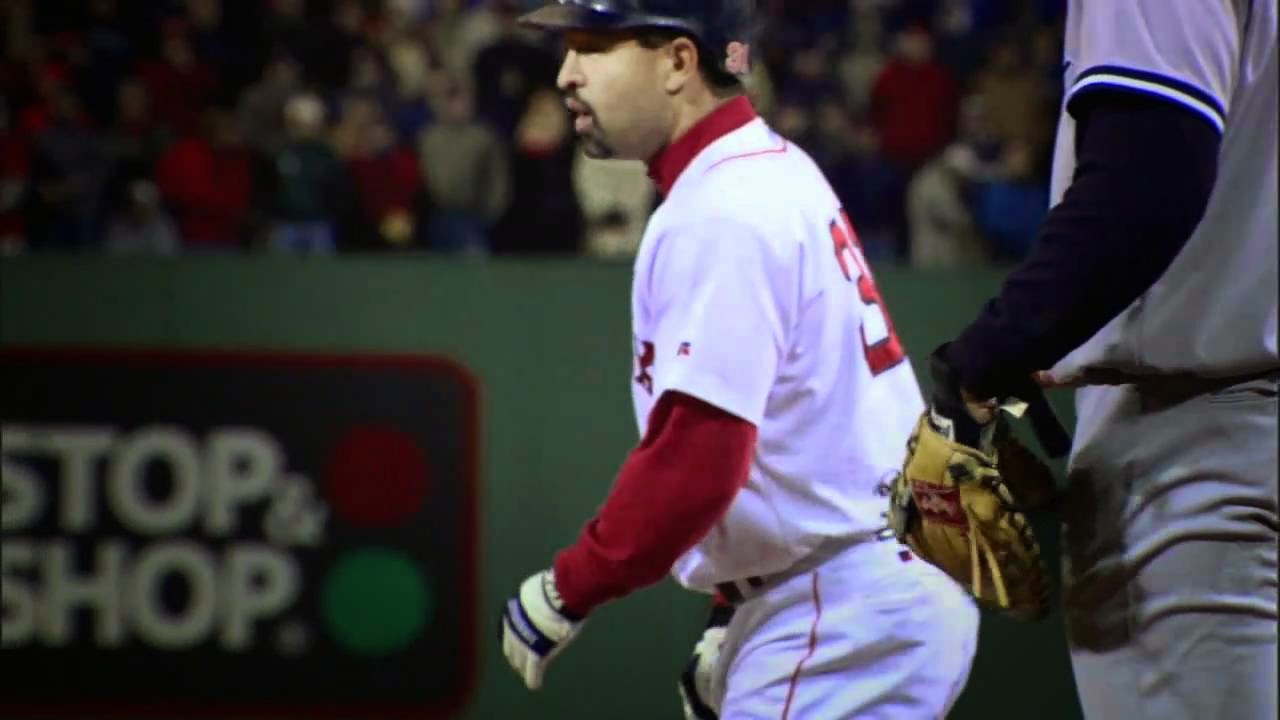 Roberts in the moment.

My latest book, "Miracle at Fenway: The Inside Story of the Boston Red Sox 2004 Championship Season" will be available nationwide on July 15 (and can currently be pre-ordered online). In advance of its release, I will be running excerpts here over the next several weeks.


The first thing he thought about was Maury Wills.

In this, the biggest moment of his baseball life, Dave Roberts was trying to focus on the topic at hand. It was the ninth inning of Game 4 of the American League Championship Series, the Red Sox trailed, 4-3, and Roberts stood on first base representing the tying run.

If the Sox lost, their season was over; the Yankees led the best-of-seven series three games to none, and were set to celebrate on the Fenway Park grass after just three more outs. They had the right man on the mound to get those outs in Mariano Rivera, the greatest closer of his or any generation.

The home fans were abuzz, urging on a Boston rally, but Roberts could not hear them. Inserted into the game moments earlier as a pinch runner for Kevin Millar, whose leadoff walk against Rivera had raised the masses to their feet, Roberts knew it was his feet that everybody in the ballpark and millions of TV viewers were now watching. 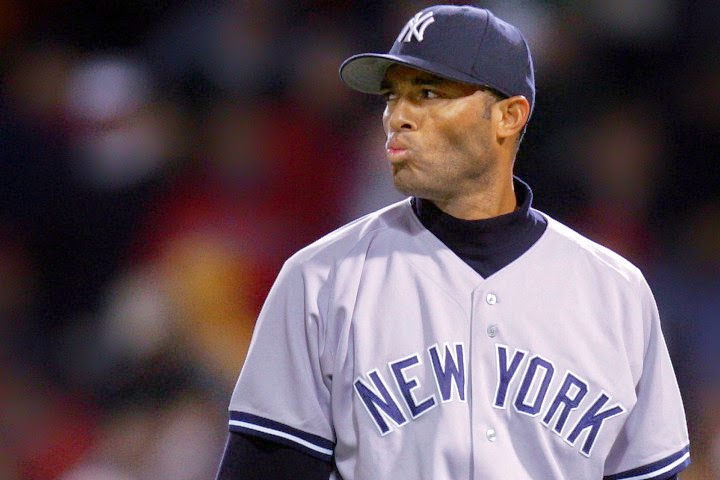 He was a reserve outfielder who had not played in a week, and he had been put in here for one reason: to steal second base and give the Red Sox a chance to tie the game on a single. The crowd knew it, the TV and radio analysts were pontificating on it, and the cameras were bracing for it -- zoomed in and ready to capture the moment.

Roberts could feel the sense of urgency, could anticipate the eyes upon him. Still, poised on the grandest of stages, he had the clarity to think back 10 months to moments in a near-empty ballpark 3,000 miles away. Moments spent with Maury Wills.

Wills was a baserunning instructor for the Los Angeles Dodgers, for whom he had once set the major league record with 104 stolen bases in a single season. Now in his 70s, slower afoot but richer in experience, he had worked with Roberts at Dodgers Stadium over the previous winter on the art of the perfect steal.

There will come a time, Wills had imparted, when you will be called upon to swipe a bag without the art of surprise in your arsenal. A quartet of defenders will be poised to stop you. The pitcher, sure you’ll be running, will be keeping you close. The catcher will be ready to take the pitch and whip it to second. The shortstop will be moving to second with the pitch, ready to receive the throw from the catcher and apply the tag. And the first baseman will be tight on the bag, in case you stray too far and there is a chance for the pitcher to gun the ball over and pick you off. 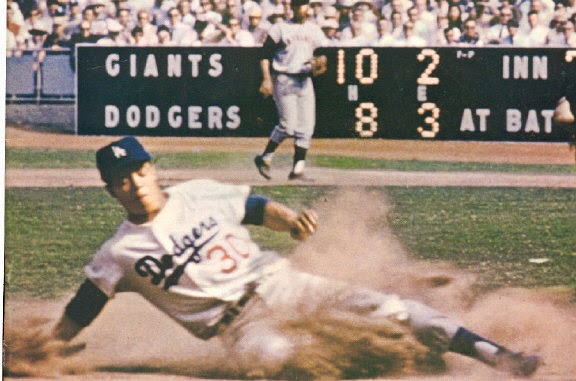 Wills in '62: Advice from an expert

In such a situation, Wills told his protégé, you’ll need to first get a big lead, and then rely on everything you’ve learned about the pitcher’s tendencies: his windup, his release point, and any moves he might make to warn you he’s ready to spin and make a pickoff throw. Roberts followed the advice. He watched video of all the Yankee pitchers, studied many of them live, and in the case of Rivera and New York catcher Jorge Posada already had some firsthand success to build on. A few weeks before, in the waning days of the regular season, Roberts had stolen second against this All-Star battery and scored the tying run in an eventual Red Sox win.

The big difference, of course, was that this was the playoffs, and an elimination game at that. If Posada gunned Roberts down here, or, worse yet, if Roberts guessed wrong on his initial jump toward second and was picked off, it could mean Boston’s season. Roberts felt his anxiety level rising, but then he remembered something else Wills had told him: You can’t be afraid to steal that base.

I might not be afraid, Roberts remembers thinking to himself, but I am most definitely nervous.

“The game felt like it was going very fast; my mind was racing,” Roberts recalls nearly a decade later. “I've got a big lead, but to just go out there and steal, it’s pretty tough. I know what Mariano is going to do; I’ve got the information. I’m getting as loose as I possibly can, but this is October, and it’s cold.” 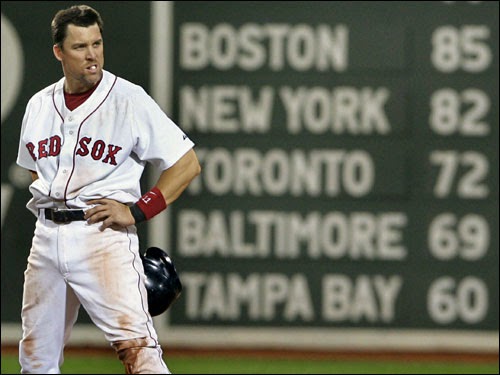 The next batter, Bill Mueller, stepped into the box. Rivera set, and then, just before starting his windup, quickly spun and threw over to first baseman Tony Clark in a pickoff attempt. Roberts dove back to the bag just before Clark slapped him with his glove. In that moment, and the one that quickly followed it, the base runner felt a change come over him.

“I think you can actually see it in the footage,” says Roberts. “He throws over one time, and my nerves start to calm. The game starts to slow down. Then he throws over a second time, and he almost gets me, which is great because for me it slows the game down even more.  My focus started to get even better – at that point it felt like I was a part of the game.”

Roberts thought of something else as he dusted himself off a second time: maybe the pitcher was as nervous as him. Rivera possessed outstanding control; he almost never walked anyone, let alone the leadoff man in an inning. His ability to coolly put games to bed for the Yankees had earned him the nickname “Sandman” around the league, and while Rivera's cool exterior did not hint at it, Roberts hoped that Millar's base on balls might have rattled the unflappable pitcher just a bit. 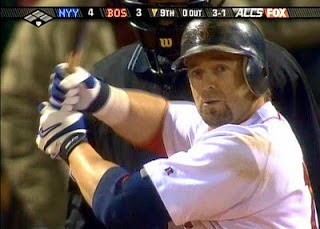 There was also recent history to consider. In addition to the September victory in which Roberts had a key steal, the Red Sox had beaten Rivera in July as well on a walkoff home run at Fenway by the same man now at the plate – Bill Mueller. Roberts hoped all these things were on Rivera's mind; if they were, it might give him a bit more of an edge was he to try for second.

The only thing Roberts knew for sure was this: eventually Rivera was going to have to deliver a pitch to Mueller. The question was when. Throughout Fenway Park, and beyond, fans watching the game on NBC or listening to the play-by-play of Red Sox broadcasters Joe Castiglione and Jerry Trupiano wondered as well.  Joe Morgan, the former Red Sox manager who had lived and died with the team for his entire 74 years, leaned forward in his basement sofa and stared at the TV – trying like Roberts to read Rivera’s mind.

So did Fenway vendor Rob Barry, a former Northeastern University pitcher who had achieved his own bit of glory as the ballpark’s premier peanut-bag tosser. From his current spot in the box seats just behind Boston’s dugout, Barry had a perfect view of both Roberts in profile and the broad back of the right-handed Rivera -- with its familiar black 42 first made famous by fellow legend Jackie Robinson. 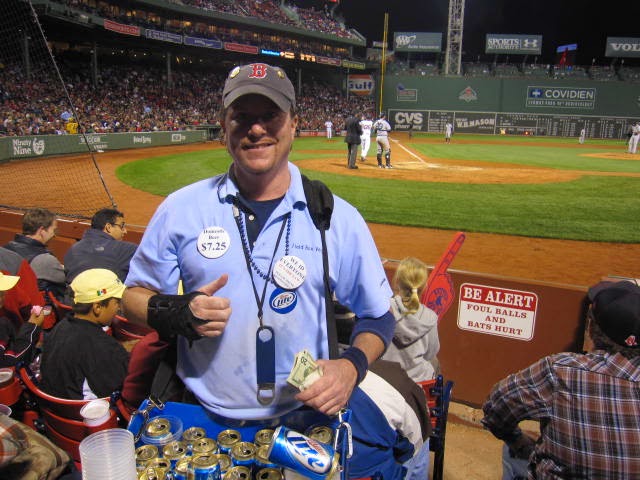 A moment later, the number blurred as Rivera spun once more and threw to first. Again Roberts lunged back, and as he got to his feet a third time he felt confidence surging through him.

“Now it felt like I had played all nine innings,” Roberts remembers with a smile. “My legs felt like they were ready to go, and I could fire to get a great jump. If he wanted to go to the plate, I had him. I knew I had him. If he had just thrown to the plate without throwing over, I don’t know if I could have felt [capable of getting] a great jump. But then, just from all the diving back, I felt like, 'I’ve got you now.'”

Just wait him out, Roberts said to himself. A moment later, as Rivera finally began his full windup – indicating he was going to throw home to Mueller – Roberts took off, head down and arms pumping, for second base.

The pitch was a fastball away, considered ideal for a catcher in terms of nabbing would-be base stealers.  Mueller didn’t swing, and as the ball slammed into Posada’s glove he was already leaping up to unleash his throw towards second. It was near-perfect, and a slightly crouching Jeter grabbed it just to the left of the bag and then in a fluid motion swept down his left arm into Roberts’ left shoulder as he dove in headfirst.

It was so close a play that for an instant nobody could tell whether Roberts had made it. Posada ripped off his mask and stared out at second base umpire Joe West, and Jeter and Roberts lifted their heads to do the same. Ron Barry, Joe Morgan, and everybody else watching live, in bars, or at home held their collective breaths – knowing that if Roberts was called out, the Red Sox would be all but out as well.

Then West spread his hands in the familiar motion known by every Little Leaguer. 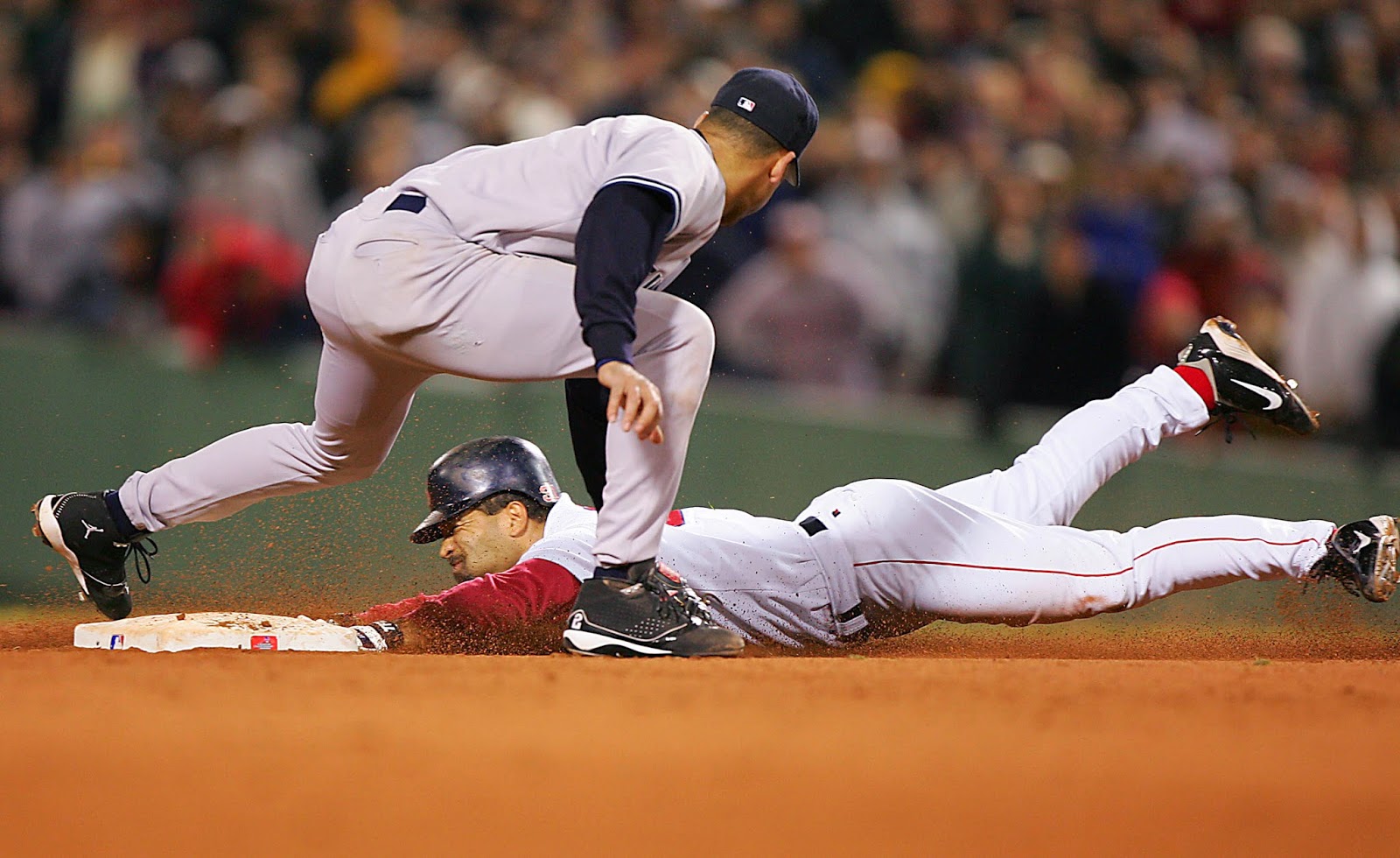