Projected Red Sox lineup: too many questions for comfort? 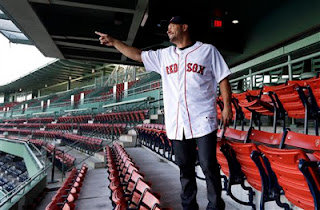 Will Victorino help point the way out of the cellar?

It has become trendy in recent weeks for experts to declare the Red Sox not only big players during the recent flurry of off-season transactions, but also big winners.

This may be wishful thinking, however, since it's hard to imagine another season as dreadful as the 69-93 last-place debacle of 2012. It's true Boston picked up strong character guys in Shane Victorino and Johnny Gomes, along with a few streaky power-hitter types in Stephen Drew and Mike Napoli. But the revamped Boston lineup still has plenty of uncertainties with spring training a little over a month away.

Let's take a look around the diamond as things currently stand (projected starters in bold):

At first base the newcomer Napoli, who can also catch, will likely get the nod provided Boston and his agent come to terms over his contract. Health may be an issue; while Napoli hit 24 homers last year and 30 in 2011, he's played more than 114 games just once in seven MLB seasons (140 in 2010). Current backup Mauro Gomez was the International League MVP at Pawtucket last summer, but in 102 at-bats with Boston posted only 2 homers. Mark Hamilton has shown bursts of power in the minors but has hit .197 in two call-ups with St. Louis.

Will dirt-dog Pedroia play himself out of a long career?

Second base remains a strong suit with Dustin Pedroia returning, but while the three-time All-Star and former MVP is still Gold Glove-worthy in the field, his OPS and slugging numbers have dropped off each of the past two seasons. He's also been injury-prone and missed 21 games in 2012. Pedroia will turn 30 in August, an age where he may soon become more prone to breakdowns (think Kevin Youkilis) if he continues playing in his aggressive, dirt-dog style.

When the Red Sox signed shortstop Stephen Drew to a one-year, $9.5 million contract this winter, it surprised a lot of people who thought all-glove, no-bat Jose Iglesias was going to get a crack at starting in 2013. Iglesias has hit above .235 just once at any level, and checked in at .118 in 68 at-bats for Boston last year. Now it's likely Drew, a veteran who has had some very strong offensive seasons, will get the nod, but he is no sure thing either after a .227 year in which he missed 80-plus games with a severe ankle injury. 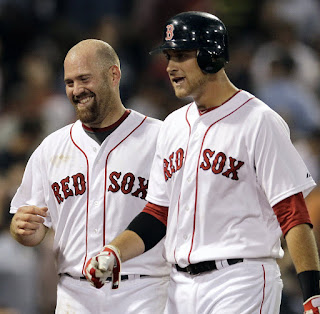 Third baseman Will Middlebrooks was perhaps the biggest surprise of the 2012 Red Sox season, as the rookie exploded on the MLB scene with a .331 average and 9 homers in his first 142 at-bats after taking over for injured-then-traded Kevin Youkilis. Middlebrooks eventually reached 15 homers and 54 RBI before being felled for the year by a broken wrist on Aug. 11, numbers that while very impressive marked a considerable drop-off from his torrid start.

Most expect Middlebrooks to continue growing as a hitter and fielder in 2013, but a sophomore slump can't be ruled out given his .194 September. Fan favorite Pedro Ciriaco, another pleasant surprise in 2012 as Middlebrooks' end-of-year replacement, will be itching to jump in again if the need arises.

In right field Victorino gives the Red Sox Gold Glove-caliber defense, but his offensive numbers (including just 11 homers and 55 RBI last year) look very J.D. Drew-esque. Since J.D.'s  strong fielding was taken for granted and his hitting over-analyzed, it's not too hard to imagine Victorino will start hearing catcalls from Conig's Corner if he doesn't come out swinging strong. 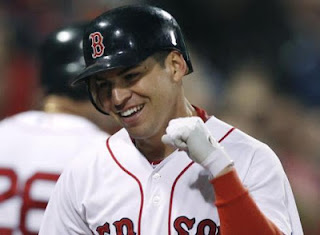 Will Ellsbury rebound -- and stick around?

Center fielder Jacoby Ellsbury was a 32-homer, 39-steal man and MVP runner-up in '11, but had almost no power (4 homers in 303 at-bats) upon returning in mid-2012 from a dislocated shoulder. By not (yet) adding Hamilton or another big-name outfielder to the roster this winter, Sox management appears to be gambling that Ellsbury will bounce back strong in his free agent year and become either blue-chip trade bait or a contract extension candidate late in the summer. His fate likely depends on Boston's place in the AL East and Wild Card races come July.

As a hitter, new left fielder Johny Gomes won't have anybody thinking of Ted, Yaz, Manny, or even Mike Greenwell, but on defense he may remind folks of butchers like Manny and Jose Canseco. Look for Daniel Nava to get the bulk of the reserve at-bats should Gomes or another outfielder falter, with Ryan Kalish, Drew Sutton, and Alex Hassan also in the mix. If Ellsbury is dealt, of course, another starting slot will open up. 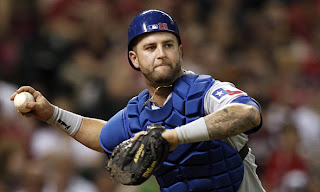 At catcher there is a logjam. It's still unclear whether Jarrod Saltalamacchia can be a 140-game-a-year receiver; after setting a 30-homer, .280 pace in the first half of 2012, he was one of the easiest hitters in the AL to strike out down the stretch and finished at .222 with 25 dingers. Doubts about Salty's durability led the Red Sox to sign David Ross (a solid back-up for Atlanta) and likely Napoli (who caught 72 games for Texas last year).

Throw in last year's primary Boston back-up Kelly Shoppach and young Ryan Lavarnway (a standout in the minors who struggled after a second-half call-up), and it's clear this position is anything but set. The chances are at least one of these five catchers -- all of whom could likely start for a big-league team -- will be dealt before spring training.

Will Ortiz be looking up all season?

Designated hitter David Ortiz provides another big question mark. Not because of the numbers he put up when playing in 2012 -- they were outstanding -- but because of the fact the seven-time All-Star missed 71 of the last 72 games with a Achilles injury and turned 37 in November. Even the svelter version of Big Papi we saw last year is a big-boned, Mo Vaughn/Boomer Scott body type who like these former Sox sluggers could lose his skills in a flash. Management showed its appreciation for Ortiz's place in club history with a new two-year contract; if he manages to keep hitting that long, he also needs to keep healthy.

The concerted effort by Boston GM Ben Cherington and his crew to pursue solid and steady pick-ups rather than A-List superstars like Josh Hamilton should help the Red Sox avoid long-term contract headaches like the Yankees now face with A-Rod. What Ben and Co. must hope is that they have not created a team without enough sure things.

Next week: A look at the pitching staff.
Posted by Saul Wisnia at 12:40 AM