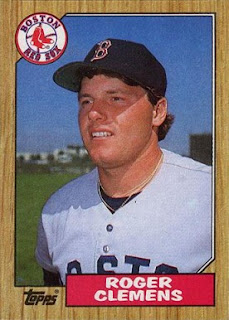 The picture stands today as the symbol of an era -- and innocence -- lost.

In it, Roger Clemens and Ted Williams share confident, youthful smiles. Williams is, quite literally, a bronzed God, staring out at the photographer in his tanned, All-American glory. Clemens, wearing a fresh, clean Red Sox uniform, also has the look of a man who knows exactly what he wants out of life.

Williams yearned to be the world's greatest hitter; Clemens the top pitcher. At the time of the picture, in 1988, both had reached their goal.

I took the photo in Cooperstown, after driving from Boston to baseball's Mayberry with three buddies for my first look at the game's red-bricked shrine. When we entered the Hall of Fame Plaque Gallery, just off the museum's lobby, I instinctively knew which of the immortals I wanted to visit first. Walking through the years to the 1966 induction class, I found him on the wall right alongside Casey Stengel:

Reaching into my pocket, I grabbed the '87 Topps Roger Clemens card I had taken on my journey. Quickly placing it atop the upper-right corner of Ted's plaque, I jwhipped out my camera, took a single shot, and then pulled the card down before I could be caught and thrown out for legend-tampering. 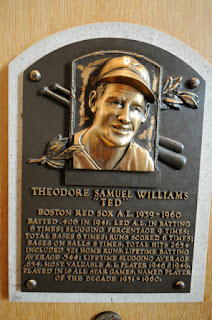 There was no digital screen on my little Kodak to tell me whether I had muffed the picture, but I wasn't going to take a chance at a second one. I just hoped for the best and went on my way.

Clemens was coming off back-to-back Cy Young seasons for the Red Sox, and appeared poised to become the Tom Seaver of his generation. Williams was the real John Wayne, the last man to hit .400 and a war hero whose #9 I always looked for first in the right-field corner upon entering Fenway Park. Both had iconic nicknames that suited them and stuck; Ted was "The Kid" and the "Splendid Splinter," Clemens the "Rocket."

When I bought this scorebook, Clemens was 14-0.

I had only seen Williams hit live in an Old-Timer's Game, but I had been watching Clemens up close since his rookie year. He was 25, I was 20, and I looked forward to many more Rocket sightings in my Fenway future.

As an aspiring sportswriter, I even had visions of seeing some of them from the press box. Then, when Clemens made the Hall of Fame, I'd show him the old picture I'd taken way back when and we'd share a laugh. Maybe I'd have him sign it for my kid.

Things didn't turn out quite as expected. By 1996 Clemens had amassed a list of achievements for the Red Sox that had him comfortably headed for his own Cooperstown plaque, but had slumped in recent years.

He still had the gas and skill to strike out 20 (with no walks) at Tiger Stadium that September, however, and few weeks later I saw him pitch another strong game at home against the Yankees. Rumors were he would be ditching the Sox as a free agent that winter, and I  joined in a long standing ovation when he left the game and tipped his cap. 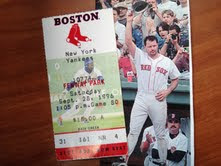 My ticket from Clemens' last game with Boston.

We knew it might be the last time he pitched for the Red Sox, and it was -- Clemens heading to Toronto to prove Sox GM Dan Duquette he was not past his prime at 34. He accomplished the task with back-to-back Cy Young, Triple Crown seasons, and when the first whispers of steroids started I tried to shut them out. Barry Bonds and Mark McGwire could be juicers, sure, but the Rocket? He had always seemed like the real deal, a throwback to another era.

Later, when I traded in my sportswriter's cap for a writing job at Dana-Farber Cancer Institute, I learned Clemens had even made a ritual of jogging over to the Institute's pediatric Jimmy Fund Clinic in uniform to visit sick kids. It was something that would have made Ted Williams -- the king of Jimmy Fund heroes -- happy as all hell.

How could Clemens risk a chance to join the Splendid Splinter among Boston's greatest all-time icons?

They still never proved anything in court, of course, but Clemens now sits right alongside Bonds as the poster boys for the steroid era. The fact the Rocket denied any juicing doesn't seem to make a difference; the damning testimony of his former trainer in the perjury trial brought against Clemens has made him guilty in the court of public opinion -- and the minds of many Hall of Fame voters. 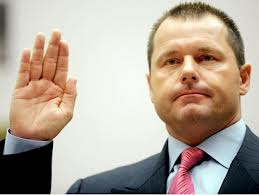 Without a glove and ball, Clemens looks lost.

The man whose 354 wins and record seven Cy Young Awards places him statistically in the pantheon of Seaver, Walter Johnson, and the other greatest pitchers in baseball history received just 36.2 percent of the vote in his first crack at Cooperstown. Although 75 percent is needed for admission, the general consensus is that Clemens will eventually make it. Still, he'll forever be tainted by the evidence and the era.

Certainly I've come around to accepting his probable guilt, tempered only by the likelihood that he first started juicing after he left Boston -- meaning those games I saw him pitch from '84 to '96 were the result of nasty stuff and not needles.

As for the picture, I did flub it after all. In my frenzy to capture the moment it had turned out blurry and a bit over-exposed. You could still tell who Clemens and Williams were, you could still see their smiles, but everything was out of focus. I didn't realize when I opened the envelope from CVS and saw the fuzzy photo just how prophetic it would be. 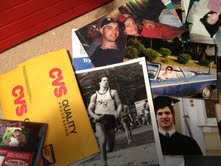 My search for the picture proved futile.

Wednesday, after the Hall of Fame voting became public, I went looking for it in a shoe box of old high school and college-era pictures. I found a bunch from my second Cooperstown visit, but none from the first -- including the Williams-Clemens shot. It was just as well.

By now, everything was in clear view.