Could Varitek catch on as coach under Farrell? 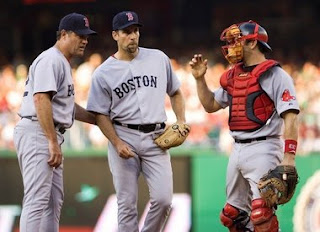 The rumors are already circulating on Red Sox.com and elsewhere that Torey Lovullo will be  joining new Red Sox manager John Farrell’s staff as bench coach. Since Lovullo served as  Farrell’s first base coach in Toronto and is also familiar with the Red Sox organization – having  managed at Triple-A Pawtucket in 2010 – this seems a logical choice.

But there is another guy with whom Farrell enjoyed a strong relationship during his four years as
Boston’s pitching coach, another guy who possess the high baseball IQ that Farrell is surely
looking for in his lieutenants:

Sure, Tek already has a new job as a special assistant to Red Sox general manager Ben
Cherington, but does anybody know exactly what that means? There were two vice
president/assistant GMs listed in this year's Boston media guide, so conceivably Varitek would
be under them. Many fans and media types believe this George Constanza-like position is
merely a place-holder until the man who caught nearly 1,500 games in Boston eventually gets
back into the dugout as a coach or manager.

Even if Luvollo gets the bench coach job, it's easy to imagine Varitek fitting into another slot on
Farrell's staff. He was known for his meticulous game-day preparation as a catcher, and  nobody this side of Ted Williams could better analyze a hitter's tendencies. Boston pitchers
(and no doubt Farrell) loved how Varitek got them ready for a contest.

Varitek could also hit a little himself, accumulating 306 doubles and 193 homers during his 15-
year career, so it's not inconceivable to see him as either a hitting or a pitching coach. If the
latter seems a strange fit, don't forget about Dave Duncan – a former catcher who has spent
some 25 years as a MLB pitching coach and has helped both the Cardinals and A's to World
Series titles.

In the weeks leading up to Bobby Valentine's inevitable firing at the end of the 2012 campaign,
there was much speculation about whether Varitek would be a good fit as the next Rex Sox
manager. Cherington put this rumor to rest quickly, which was likely a good thing. Even if Tek
did want the job, it would have been tough for him to come in with no experience and try to
discipline guys he had played with just two years before.

Coaching is another story; you're an instructor rather than the big boss, and it's not vital that you
be a hard-ass. Knowledge of the game and a desire to work hard are the two keys to success
in the coaching ranks, and Varitek possesses both. He's also a link to the glory years of 2004
and 2007, good karma which the team can surely need.

Varitek did take some heat for being captain of a club that collapsed epically in the 7-20,
chicken-and-beer fiasco of last September, but the team was even more rudderless without
him this year, going 69-93 for Boston's worst record since Varitek 1965 – seven years before Vartek was born. 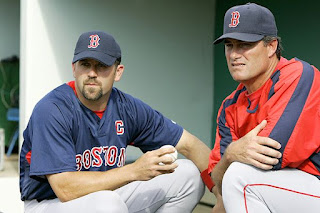 Coming soon to a dugout near you?

Catchers have long been considered the smartest men on the field, and it's no coincidence that
this year's four League Championship Series managers – Mike Matheny, Joe Girardi, Jim
Leyland, and Bruce Bochy all spent their playing careers behind the plate. If he's interested,
Varitek could likely match wits with any of them.

All he needs is a shot.