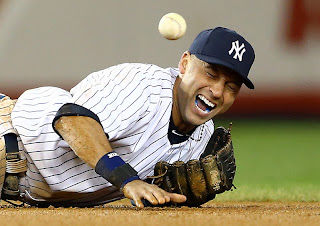 Ever the gamer, Jeter still gets the ball out of his glove.

As soon as the first replays showed Derek Jeter's ankle turning grotesquely as he dove to stop a ground ball from Tigers batter Jhonny Peralta in the 12th inning of last night's ALCS opener, fans of a certain age immediately thought of a similar injury to Redskins quarterback Joe Theismann caught live on Monday Night Football.

Theismann's injury -- a broken leg -- ended his career. Jeter is out for the remainder of the postseason, but the impact the injury may have on the rest of his time with the Yankees is uncertain. As a Red Sox fan who has never booed and always respected the New York shortstop, I would hate to see him go out this way.

If this setback were to slow or end Jeter's career, it could stop him from making a run at one of baseball's most legendary records.

With a MLB-best 216 hits this season, Jeter has 3,304 hits in his career. This is tops among current players and good for 11th place on the all-time list, 952 behind record-holder Pete Rose. Jeter is 38 years old, and while it may at first seem unlikely that someone his age could make up that gap, it was not implausible in this case -- at least heading into tonight.

Jeter has remained in excellent condition as he has aged. Although a calf strain last season caused him to miss 31 games, he bounced back to play in 159 of New York's 162 contests this year. In 16 full non-strike seasons, he has never been below 148 games played in any other year.

Were he to continue playing in 140-150 games each season for the next five years, while maintaining close to his average of 190-200 hits, he could get the hits needed to catch Rose while still well short of his 44th birthday. Again, while this may seem a stretch, consider that Rose himself played until he was 45 and a half. 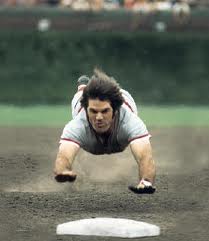 Could a healthy Jeter leave Rose in the dust?

Jeter is so productive a hitter, and such an iconic figure to Yankees fans, teammates, and even those of us who watch him at Fenway Park, that it is plausible to imagine the club would move him to a less demanding position such as first base or even designated hitter in the future to reduce the wear and tear on his body.

Now, however, all those possibilities are up in the air until the extent of Jeter's injury is known. Even were he to return to the Yankees lineup next season, the damage may limit his speed on the bases and agility in the field.

And if this is the case, it might put another less-heralded but no less important record out of Jeter's reach. He currently has 1,868 runs scored for his career, 427 behind top man Rickey Henderson all-time.

This mark appeared more possible for a healthy Jeter than the hits record, since he could reach it in a little more than four years were he to keep crossing the plate nearly 100 times a season in the potent New York lineup. Now it too is up in the air.

The Yankees will have to go the rest of the way this postseason without their captain and leader. What happens after that is still uncertain, but even Red Sox fans would hate to see one of baseball's most beloved figures unable to perform at a high level.

We may love to hate ARod, but Jeter is up there with Mariano Rivera as a Yankee who will always get the respect he deserves from this Fenway fan -- and would be sorely missed.