Looking at "Fenway Reflections" Fans in Other Countries 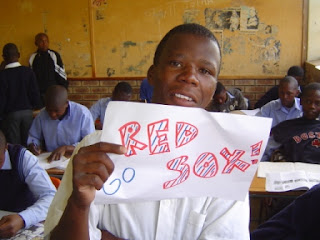 There are plenty of viewers that like to look at Fenway Reflections, and people from lots of places read it from time to time, including (our blog stats tell us) from countries from all over the world. We know how some (like in Canada and England) might know about the Boston Red Sox, but there are some that are interesting to know that I wonder about sometimes -- how do you guys get to know about the Red Sox and our site on the team to read and go on?

So there is Gabon (16 page views), a country on the coastal area of the continent Africa, surrounded by other countries like the Congo in the East, and Equatorial Guinea and Cameroon to the North. You guys have an average of 26 people per 1,000 with any kind of access to the Internet and 11.5 people per 1,000 with working cable TV. There is no public television, only government- and privately-owned stations, and there are not too many phones either, so there are not too many ways to get communication from other places.


You guys play sports very well and are most known for football (soccer in America), basketball, and a little bit of tennis. You guys have many groups of different players on football teams(like city teams in Makokou and Moanda) and you have international and country teams for tournaments and things like that. But how do you get to know about the Red Sox!?

You guys do play a little bit of baseball in some of the cities (Libreville and Port Gentil) and are listed to play it on some websites that talk about your players and teams. But the Red Sox play in Boston, Massachusetts in the United States in North America, and that is 9,477 kilometers or 5,889 miles from your country. Is there someone where you live that has been to America and traveled there and has told you, or someone who moved there from America and then told you, or someone where you live found it out, or you read it or found it out yourself about our baseball team. But....of all the baseball teams in the country, some of you there know OUR TEAM.

What is even more amazing is that out of any kind of book or piece of info on the Red Sox and all of their stuff, you found this one blog on them and have been learning more about us. I hope you are able to come here personally to Fenway Park sometime in your life. And the Red Sox, in their now shape of a record of 5 wins and 10 losses they can use any fans and encouragement or just about almost anything they can get right now because of what the team is like right now.


Then there are the countries of India (69 views) and China (65 views) and that area of the world. In China, the sports in the culture include martial arts (such as karate and judo), and there are plenty of popular Chinese basketball players on teams in China or in other leagues and countries. There are also Chinese athletes playing football, table tennis (also called Ping-Pong), badminton, different kinds of swimming, and the sport Snooker (which I think is maybe a different version of a game of pool).

In India, the traditional sports they play include Kabaddi, Kho Kho, Pehlwani, and Gilli-danda, some older and earlier versions of Asian martial arts, such as Kalarippayattu, Musti Yuddha, Silambam, and Marma Adi, which were originally done in India. There are professional and non-professional tennis playing, shooting games, and other sports that are immensely popular and which they are very good like wrestling, boxing, and badminton (I read the rules and I do not understand it at all but it sounds like a different version of tennis). Football is popular too.

Sometimes China and/or Japan have a team in the National Little League Tournament, and they have even won too. There are some baseball players in Asia’s history from Japan to go to the big leagues on the Boston Red Sox such as Daisuke “Dice-K”  Matsuzaka and Juni Chi Tazawa, two pitchers that are partly starters and back-ups in the rotation. They are famous in their home country (for some good and some bad reasons) and popular to fans in other Asian countries.

There are no Red Sox players from India, but they're still fans for us to add to Red Sox Nation. They have a program with the Red Sox that brings young Asian boys and girls to Massachusetts to be with the Red Sox in Boston and play baseball, and there are other ways for baseball to get to these countries. From China to us is 11,317 kilometers or 7,032 miles, and India is 12,838 kilometers or 7,694 miles away. This blog is so good that it’s found in countries in Asia on the other side of the world. There still is a connection between the different parts of the world to reunite and make a bond for Red Sox Nation.

Then there is Ukraine, which has 949 views in total! This is a country in the boundary line area between Asia and Europe area. Sports are very big in Ukraine's culture. There are many different kinds of athletic facilities and places to go, like gyms, swimming pools, community centers, and places like that. Their main and most popular sport is football, and they have many leagues, but their most popular and well-known is Vyscha Liha (“Premier League" in English). Ukraine’s two most popular and successful teams in football are the two most successful teams in the Vyscha Liha league (FC Dynamo Kyiv and FC Shakhtar Donetsk). They are hard-core rivals (just like the New York Yankees and the Boston Red Sox, except we are not so good right now compared to them).

Some of the most popular and greatest athletes the world has had were Ukrainians such as the gymnastics legend, Sergey Bubka, who holds a record in the pole-vault, and with all his great speed and strength and his ability in gymnastics has repeatedly been voted by people to be one of the world's best athletes. Most of the best Ukrainian football players in history were on the (former) Soviet National Football Team, including Igor Belanov and Oleg Blokhin. Both were winners of the Golden Ball Award for the best football player of the year.

Now the player and captain of the Ukrainian National Football Team is named Andriy Shevchenko.The team made its first appearance and showing in the 2006 FIFA World Cup championship, and reached the quarterfinals in the tournament, but were then beaten by the eventual champions (Italy). There have also been famous Ukrainian boxers and wrestlers who have won the world heavyweight competition including the brother match-up of Vitaliy Klychko  and Volodymyr Klychko. Ukraine is 7,396 kilometers or 4,596 miles from us in Boston, Massachusetts and they still know of our team.


As you can see, there are plenty of different countries all over the globe everywhere that like the Red Sox and are hoping for the best for them no matter what.
Posted by Saul Wisnia at 11:06 PM