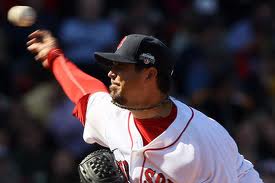 Once we all figured out the irony of what was happening, it was good for a laugh. In the eighth inning of Friday's home opener, during which the Red Sox scored eight runs and sent 14 men to the plate, the smoke alarms and flashing emergency lights began going off throughout Fenway Park.

It was as "hot" a display of hitting as the team has shown during the early season, so this type of reaction was humorously fitting. Even funnier was when the inning ended and "Burning Down the House" came over the loudspeakers.

After a terrible first week on the road, Friday the 13th offered a wonderful antidote for Red Sox fans with great weather and a near-perfect 12-2 Opening Day win at Fenway. 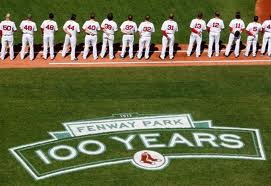 There wasn't too much pomp and circumstance before the game -- Dr. Charles and Co. are no doubt saving their best top-secret stuff for the100th birthday bash vs. the Yankees on April 20th -- but we did get the obligatory full team introductions from Joe Castiglione including video men, therapists, nutritionists, and accountants (just kidding on the last one). I noticed Joe didn't mention any Japanese interpreters this year, although I imagine one will be back on the payroll if and when Dice-K comes back.

New manager Bobby Valentine got a lukewarm reception, as did starting pitcher Josh Beckett. (The way both had started the season, this was not shocking.) In contrast, the crowd stood and cheered for several minutes as Jason Varitek and Tim Wakefield emerged from underneath a huge American flag draped over the Green Monster and walked slowly to the mound for their ceremonial first pitches. 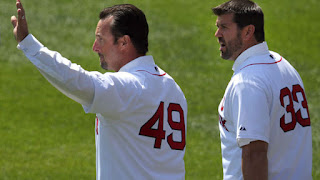 Although personally I would have preferred that Wake throw a nice knuckler to Tek, having Jim Rice and Dwight Evans come out as surprise catchers for the honorees was pretty cool too. It was announced that both Varitek and Wakefield would each be receiving their own "appropriate, individual evenings" later in the season (the right move), and then legend-in-residence Johnny Pesky came out to start the year with a "Play Ball!" yell. Johnny (see at right) needed the help of a couple attendants to make it to the microphone, and at 92 1/2 Mr. Red Sox is finally starting to look his age. 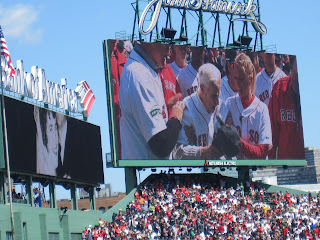 Beckett, shelled in his first start of the year at Detroit, wound up being one of the day's two best stories. He let up a couple loud doubles and trailed 1-0 through two innings, but then allowed just two singles over his last six frames while throwing an economical 94 pitches on the afternoon. His teammates gave him a 4-1 lead by the fourth, and if they had not gone on their long eighth-inning tear, it's likely Beckett would have gotten a shot at a complete game. (Oddly, he had just one strikeout, but nobody seemed to notice or mind.)

The other big plus was the play of Kelly Shoppach, who got a rare start at catcher and made the most of it. In addition to working well with Beckett, he reached base four times on two doubles, a single, and a hit-by-pitch, scored three runs, and drove it two. He even had the first stolen base of his 464-game ML career, which featured an ugly slide and lunge that looked like something out of "Blades of Glory." 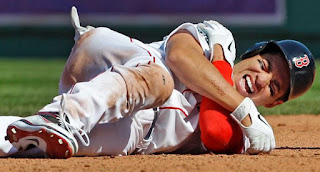 By now you probably know the only real bad news of the day. In the fourth inning, while trying to break up a double play, Jacoby Ellsbury was hit in the shoulder by leaping shortstop Reid Brignac and forced to leave the game. While the full extent of the injury would not be released until Sunday, rumors were that Ells has suffered a dislocation and would be out six-to-eight weeks. (See the play here.)

How the Sox will fare without their leadoff man remains to be seen, but if Josh Beckett can keep pitching like he did Friday, that will help keep the team "hot" -- and (hopefully) keep away the 1-5 stretches.
Posted by Saul Wisnia at 3:29 AM