Tek, Wake, and the March to Middle Age 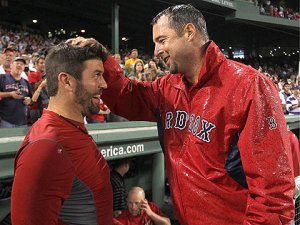 Clearing snow off my windshield in the shadow of Fenway Park, I listened to Jason Varitek’s retirement speech on the cranked-up car radio. Tek’s voice cracked at the mention of his daughters and teammates, and I felt something crack inside me as well.


At the time I thought it was just sadness over a second two-time Red Sox champion hanging up his spikes in as many weeks. In retrospect, I realized it was something far more meaningful.

As a just-miss baby boomer born in April of 1967, my life as a Sox fan can be measured through the careers of four special players. 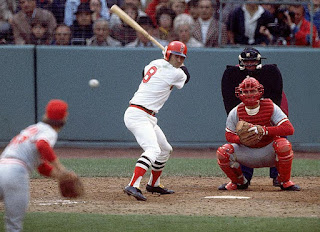 From the time I played with hot wheels through the time I got my first real wheels, Carl Yastrzemski was spinning his bat and tugging at his pants in the Fenway batter’s box. The spring after Yaz hung up his cleats in ’83, a brash young flamethrower from Texas emerged to provide great thrills for the next dozen years – blowing away batters as I moved through high school, college, and my early years as a sportswriter.
I was often far from Boston in those days, but even in the sticks of Jamesville, New York, or Frederick, Maryland, a glance at a newspaper pitching line that started with “Clemens” was all I needed to feel the rush of Yawkey Way. I eventually scored a big-city job and a relationship I thought would last forever; when the latter didn't, I left the former and returned to Boston and the next phase of my life.

This was the summer of '95. Rumors were swirling that Clemens would be leaving town at season's end, and I was among the horde giving him a standing ovation as he left what would be his last Fenway start that September. But as one pitching stalwart departed, another emerged. 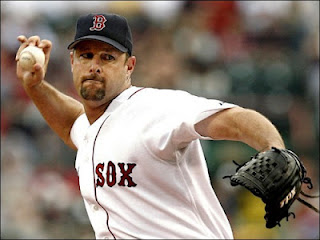 Tim Wakefield was more flutter than fire, but he still made hitters look foolish in starting his Red Sox career 14-1. He was also just a few months older than myself, and since he looked and acted more like a “regular guy” than a star ballplayer, I took an instant liking to him. He took my mind off my heartbreak.
Just a month after Wake and the Sox were bounced from the playoffs that fall, I met my wife. And just a month after we got engaged in June of '97, Boston GM Dan Duquette made the heist of the decade in picking up pitcher Derek Lowe and catcher Jason Varitek from the Mariners for underachieving bullpen ace Heathcliff Slocumb. 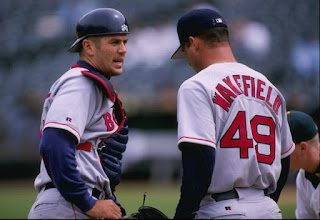 Wakefield and Varitek would remain with the team through the next 15 seasons -- a period of dramatic change for the team and myself. I got married, bought a house, and watched the birth of my children just a few blocks from Fenway. I didn't name my son Jason (born in spring training of 2001) after Boston's gritty catcher, but I didn't mind if some people thought so. And when the Red Sox rallied to beat the Blue Jays the night of my daughter's August 16, 2004, birth, and on the next day as well behind a Varitek home run, it started a 22-3 stretch I deemed "The Rachel Effect."

Rachel and Jason were both watching with me when Varitek leaped into Keith Foulke's arms that October, and again when Tek and Jonathan Papelbon danced for joy three years later. Wakefield was also a big part of those World Series teams, of course, and my respect for him grew as I became a firsthand witness to the time and joy he brought young cancer patients in the Jimmy Fund Clinic at Dana-Farber Cancer Institute. This, I explained to my kids, was the sign of a real hero. 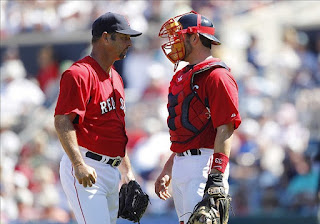 Most people hoped their trips to Fenway coincided with a Pedro Martinez or Jon Lester start, and while I certainly enjoyed watching these men at work, I also loved seeing Wake take the hill. You never knew what you were going to get, nor did the batters, but his efforts were a lesson in determination. Varitek was also a pleasure to observe, as much for his take-charge attitude behind the plate as for his clutch hitting.

Long before most people took notice of his growing victory total, I began telling my kids and anybody else who would listen that Wakefield had a chance to win more games than any other Red Sox pitcher. After all, I implored, fellow knuckleballer Hoyt Wilhelm had lobbed them up until he was nearly 50. I also had high hopes for Varitek managing to scrape together enough homers and All-Star selections to merit Hall of Fame consideration.

Neither of them quite reached these goals, but even if they don't make it to Cooperstown they both hold a special place on my list of all-time favorite Red Sox. Just as Yaz defined my youth and Clemens my early adulthood, Jason Varitek and Tim Wakefield carried me through to the cusp of middle age. I have far less hair and a few more pounds than in '97, but plenty of great memories.

Thanks for the ride.