Where does Ellsbury's 2011 rank among all-time Red Sox lead-off seasons? 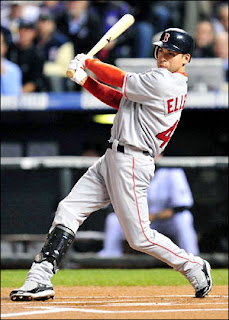 We're all wondering what Bobby Valentine's Opening Day lineup is going to look like, and while the new skipper isn't divulging anything yet, there is speculation among fans that Jacoby Ellsbury will be vacating the lead-off spot. If he does, he'll be a tough No. 1 man to top.

The Sox were a major disappointment in 2011, but Ellsbury -- already a proven hitter and two-time stolen base champ -- emerged as a superstar. The fleet center fielder batted .321 with 32 homers, 39 steals, and 105 RBI, great numbers for anybody but outstanding for someone who spent 144 of his 158 games atop the batting order. When the rest of the team was free-falling, he hit .358 with 8 homers in September.
Throw in his Gold Glove, and it's no surprise Ells was runner up to Justin Verlander in the MVP voting. How does Ellsbury's season rank among the best by Red Sox leadoff man in history? Let's take a look at the Top 10:

10. Patsy Dougherty, 1903:  http://www.baseball-reference.com/players/d/doughpa01.shtml When talking great Sox leadoff men, it makes sense to start with one of the first. Dougherty patrolled left field for Boston at the old Huntington Avenue Grounds, and in 1903 he helped the Sox (then known as the Americans) to the AL pennant with a .331 average and a league-best 195 hits and 107 runs scored.


He wasn't done yet. In the first modern World Series that followed, Dougherty hit Boston's only two home runs as the Sox prevailed in eight games over Pittsburgh.

9. Jerry Remy, 1982: http://www.baseball-reference.com/players/r/remyje01.shtml The Fall River, Mass. native was just 25 when he first suited up for the Red Sox, but injuries prevented the speedy, steady second baseman from a lengthy career. The '82 season was an exception, as the 5'8" Remy managed to get into 155 games and bat .280 with 16 steals from the top of the order.

8. Rick Burleson, 1977: http://www.baseball-reference.com/players/b/burleri01.shtml The "Rooster" did not have the speed of a prototypical leadoff man, but this slick-fielding shortstop with a rifle arm was the Dustin Pedroia of his day—a 165-pound hell-raiser who was always at the center of the action. In '77, setting the table for a powerful Red Sox lineup that led the majors with 213 home runs, Burleson hit .293 with his usual stellar defense.

In 1918 he hit just .235, but was among the American League’s top 10 in doubles, triples, runs scored and stolen bases as Boston claimed its last Series win of the pre-curse era. In 1971, Hooper made the Hall of Fame. 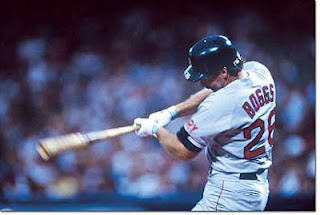 6. Wade Boggs, 1984: http://www.baseball-reference.com/players/b/boggswa01.shtml Wade Boggs usually batted second or third in the Red Sox lineup, but in '84 the future Hall of Famer was predominantly
in the leadoff spot in front of sluggers Dwight Evans, Jim Rice and Tony Armas.
This was actually an "off" year for Boggs at the plate, as The Chicken Man batted .325 to finish third in the American League. It was the only year between 1983-88 that he didn't win the AL batting title, but he still had his customary 200 hits and 100 runs scored—good enough numbers to make this list. 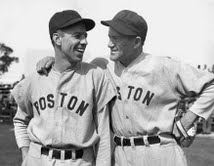 5. Billy Weber, 1934: http://www.baseball-reference.com/players/w/werbebi01.shtml Among the first of many players purchased by new Red Sox owner Tom Yawkey in 1933-34, third baseman Werber (on left above, with manager Joe Cronin) had a terrific debut season at Fenway—leading the AL in batting, stolen bases and runs scored for most of the '34 season atop the Boston order.

A broken toe suffered when he kicked a heavy water bucket in the dugout after a bad at-bat slowed Werber down late in the year, but he still finished with a .321 average, 200 hits, 41 doubles, 10 triples and a league-best 40 steals. He later topped another impressive list, achieving status as the oldest former major leaguer before his January 2009 death at age 100. 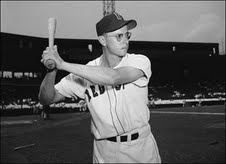 4. Dom DiMaggio, 1950: http://www.baseball-reference.com/players/d/dimagdo01.shtml Usually considered by those who saw them all play to be the best defensive player among the three slick-fielding DiMaggio brothers—and one of the best center fielders in history—Dom was also an exceptional leadoff man for the great near-miss Red Sox teams of 1946-50.
The 1950 season was no exception, as the "Little Professor" led the AL with 131 runs scored, 11 triples and 15 stolen bases while batting .328 setting the table for buddies Johnny Pesky, Ted Williams and Bobby Doerr. If it had not been for the three years he spent in the service during World War II, Dom might have joined Bobby, Ted and brother Joe in the Hall of Fame.

3. Tommy Harper, 1973: http://www.baseball-reference.com/players/h/harpeto01.shtml After Werber's 40 steals in 1934, it took nearly 40 years for another Red Sox player to crack the 30 mark in one season. When he did, Harper was far from finished.
The left fielder swiped 54 bags as Boston's lead-off man in '73, breaking Tris Speaker's 1912 team record of 52 and leading the American League. Harper also hit with power, cracking 17 homers and collecting 71 RBI. Like Speaker, his team steals record would stand a long time—until obliterated by Ellsbury's 70 in 2009. 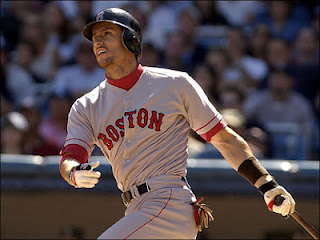 2. Nomar Garciaparra, 1997: http://www.baseball-reference.com/players/g/garcino01.shtml Before he became a chiseled Sports Illustrated cover boy, Nomar Garciaparra started out his big-league life as a lean leadoff man during his rookie year of 1997.
Everybody knew he had a strong glove, but the shortstop amazed everyone with his bat. He had 30 home runs and 98 RBI—the latter a record for a leadoff batter—and led the AL with 209 hits and 11 triples. He also scored 122 runs, had 22 stolen bases and had a 30-game hit streak. "Nomah" was a unanimous choice for Rookie of the Year, and his days as a leadoff man were soon over.


1. Jacoby Ellsbury, 2011: http://www.baseball-reference.com/players/e/ellsbja01.shtml It's hard for a No. 1 batter to top a year like Nomah had in '97, but Ellsbury gets the edge for his '11 campaign.
In becoming the first 30-30 man in the 110-year history of the Red Sox, Ellsbury led the AL with 364 total bases and compiled a .552 slugging percentage. And while he couldn't edge out Justin Verlander for MVP, he was a runaway choice for AL Comeback Player of the Year after playing in just 18 games during 2010 due to injuries.
Will Ells be back atop the Boston order in 2012, or will his potent bat tempt Valentine to drop him down a few slots to the middle of the lineup? As of early March, Bobby V. isn't saying.
Posted by Saul Wisnia at 11:16 AM