For Father’s Day, a (G)love Story 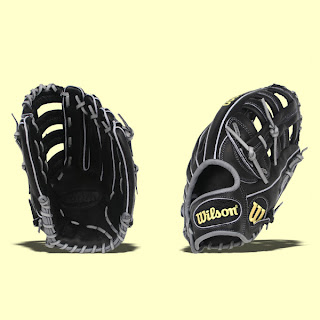 “You be Jason Varitek, and I’ll be Tim Wakefield,” my daughter yells, grabbing her mitt and heading to the backyard for some post-dinner pitching. At age 7, Rachel is already on her second hand-me-down glove from big brother Jason, but she’s never asked me for a new one. Looking at the ancient model I put on my own left hand, she knows better.
My glove is older than Rachel, older than 11-year-old Jason, older in fact than my marriage to their mother – which is moving into its 14th summer. The Wilson A2000 I’ve used to teach both of them the game has been with me through more than two decades of life-changing events. It’s worn, scuffed, and recently popped its first leak in the form of a broken string, but it’s never disappointed me. That’s tough to find in a human or horsehide.
It was once one of a pair – his-and-her mitts bought in 1991 with my fiancée Sharon for our first season as coed softball teammates. They were pricey for the time, I think about $70 each, but friends assured me the A2000 was the Cadillac of gloves. Oiling them down and wrapping them in bungee cords, we put them under the bed for a couple days to break them in and then practiced with them diligently.
We got to the point where we felt sure we’d be the terror of the Boston JCC League, but the day before our first game I broke my ankle playing basketball and spent the summer in a cast covered with the “Ws” and “Ls” of a dismal Red Sox season. Sharon was a trooper and played the season without me, but my only memory of the campaign is almost getting into a fistfight with a cocky jerk who yelled at her for dropping a ball at second base.

A well-traveled friend.
The gloves made the drive with us to Washington D.C. when Sharon got a job with the government out of grad school, but they didn’t get out of the closet much for the next three years. We both worked crazy hours, her in the office and me in the press boxes of college and minor league ballparks across Maryland and Virginia. I saw plenty of action covering games for The Washington Post, but my glove didn’t. When I had time for a workout, it was usually at 10 a.m., and swimming or running were the logical choices when everybody else was at work.
Try using a mitt before it’s well broken-in and you wouldn’t have much success. So it is with relationships; Sharon and I had started dating while we were both in school, and I was only 21. I wasn’t nearly broken in, and even though we had met on a diamond – during a 1988 pick-up game with some high school buddies in the midst of Morgan Magic – our mutual love for baseball wasn’t enough to get us through a dismal slump that started not long after our May 1993 wedding. By the time Kevin Kennedy took over for Butch Hobson two years later, we decided to call it quits.
She stayed in D.C. with her A2000, while my glove headed back to Boston in the trunk of my old Accord. I found a basement apartment in Coolidge Corner and started carving out a writing career at the Herald, Globe, and anywhere else I could get published. Once again, there was little time for games. That fall, I met Michelle -- who couldn’t care less about baseball but was very well broken-in as a person. At this point I was too, and we fit like a hard grounder to Pedroia in the hole. Sometimes tough to handle, but smooth in the end. We married three years later, just before Mo Vaughn defected for Anaheim.

From one glove to three.
The glove story didn’t end there, however. Jason was born on the first day of spring training, 2001, and two years later made his first pilgrimage to Yawkey Way for a Father’s Day game with the Astros. He brought along a tiny plastic red-and-blue Red Sox mitt, and I took my A2000 out of the closet and shook off the dust. It was the glove’s first trip to Fenway too, and we all saw a great contest – a 3-2 Red Sox victory capped by a Manny Ramirez single in the 14th inning.
The next summer our daughter was born on Aug. 16, and the Sox celebrated by beating the Blue Jays a few blocks away at Fenway and then winning 22 of their next 25. I dubbed this streak the Rachel Effect, and the good luck carried into October and the curse-busting victories over the Yankees and Cardinals. When the last grounder of the World Series went from Foulke to Mientkiewicz, the four of us were all watching together (with the glove just a few feet away). 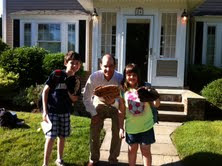 Favorite throwing partners (for now).
Now the A2000 almost never goes more than a day or two between outings to the backyard and beyond. I’ve given up fulltime sportswriting for a job that has me home at nights and weekends, where Jason and Rachel have both taken aim at the dark, cracking center of my mitt thousands of times. Michelle remains a reluctant but supportive fan, and I’ve even gotten back into playing ball myself with a casual men’s softball league.
It was in one of these games, just a couple weeks ago, that I first noticed the broken string. One of my teammates, a friend of nearly 30 years who had been playing with me the day I met Sharon, and helped me pack up and leave Washington back in ’95, told me to borrow someone else’s glove and “not take any chances.” But I couldn’t do it. I figured the A2000 had come this far with me, it was good enough for a few more innings.
Jason is 11 now, and is more into hanging with his friends than playing catch with dad. I know Rachel will reach this point soon enough as well. But whenever their buddies are busy or they perhaps feel a bit sentimental and call on the old man, I’ll be waiting – and so will the A2000.
Good gloves are hard to find.
Posted by Saul Wisnia at 4:48 PM