Clay and Jon Had Better Be On 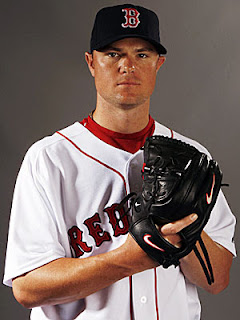 The fate of the 2013 Red Sox may very well lay in two sets of statistics:

The first numbers cover the period from April 2010 through August 2011, when Lester and Buchholz were two of the best starting pitchers in the American League. "WHIP" -- walks plus hits per innings pitched -- has become a popular measuring stick for effectiveness. 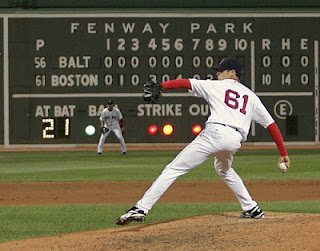 Below those are what the duo has done since, as they and their team have come crashing to earth. Both were key factors in the 7-20 free-fall of September '11 that cost manager Terry Francona his job -- Buchholz through injury, Lester by ineffectiveness. It was hoped new man Bobby Valentine could spark a turnaround in the pair, but their travails continued on the dismal last-place club that finished 69-93  in Valentine's lone Boston summer of 2012.

Which Lester and Buchholz will we see this year atop the Red Sox rotation? Therein lies the key to new manager John Farrell's staff.

Ownership is hoping that the return of Farrell to Boston -- where, under his tutelage as pitching coach, the left-handed Lester (19-9) and right-handed Buchholz (17-7) flourished as All-Stars in 2010 -- will coincide with a return to form by these hurlers. Both are still in their prime, and if they can regain their co-ace status the Red Sox can take a huge step back toward respectability in the AL East. In Buchholz's case, this also means bouncing back from back problems that sidelined him during last year's second half. 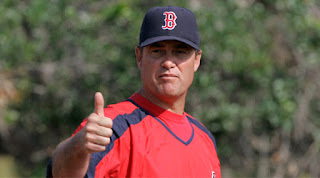 John Farrell believes he'll get both aces on track.

"We feel they are some very tangible adjustments Jon Lester can incorporate to back on track. Clay Buchholz same way," Farrell told the crowd at a Hot Stove event on Cape Cod earlier this month. The new skipper isn't saying what those alterations are, but you can bet it's not a new chicken wing recipe.

Beyond these two, the rotation is even less predictable -- and potentially hazardous.

New No. 3 man Ryan Dempster pitched worse than Lester and Buchholz in the second half of 2012, compiling a 5.09 ERA and 1.453 WHIP for the Rangers after a terrific first half (2.25/1.038) with the Cubs. Dempster had several decent years in the National League with the Cubs and Marlins, but the offensive firepower he'll regularly face in the AL East will test his mettle.

Dempster's past doings against the division -- mostly in inter-league games -- are not encouraging. The 35-year-old has a lifetime ERA of 5.27 versus Toronto and 7.62 (with an 0-4 record) against the Yankees. If that trend continues the Green Monster at Fenway could have quite a few more dents by summer's end. 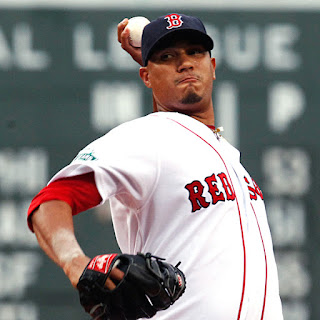 Can Doubront do it for a full season?

Felix Doubront was one of the few positive stories on the 2012 Red Sox, He went 11-10 in his first full season, and for much of the year was the team's most reliable starter. He slipped badly (1-5, 6.04 ERA) in August-September, but is still just 24. He had an excellent strikeout-to-innings pitched ratio of 9.3, and management hopes another year of experience will bring increased consistency and durability.

Lackey missed last year after having Tommy John surgery, but insists he now feels better than ever. Snce his pre-Red Sox resume included a 19-9 season and several big postseason wins for the Angels, one could be encouraged by such talk. Of course feeling good and pitching well don't always go hand-in-hand, and Lackey is not being counted on for much. 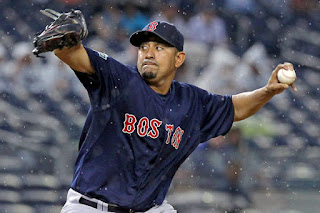 Rain or shine, Morales was solid for the Sox.

Middle relief was busy on last year's club, when no Boston starter had more than 11 wins. Franklin Morales, Craig Breslow, and Junichi Tazawa, all standouts in 2012, are slated to return. Morales, a left-hander, can also start.

The experiment to turn excellent set-up man Daniel Bard into a starter in '12 was a disaster, and the hope is that Bard can shake off memories of last summer's minor league demotion and regain some of his old form in the bullpen. Oft-injured Andrew Bailey was likewise a major disappointment as last year's closer, and this forced Valentine to turn to Alfredo Aceves at the end of games. Aceves did nothing to make fans forget departed stopper Jonathan Papelbon.

Now management hopes the recently-acquired Joel Hanrahan can do so. Hanrahan was an All-Star the last two summers with the Pirates, notching a combined 76 saves, 2.24 ERA, and 128 strikeouts over 128 innings. Bailey will be counted on to fill Bard's old eighth-inning spot, and if Hanrahan falters as closer perhaps Bailey can assume the role he once handled very effectively with Oakland. 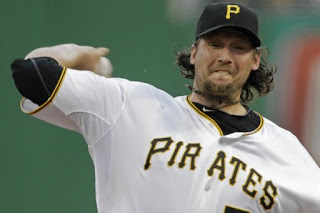 Joel Hanrahan: The answer at the end?

Of course for the closer to even matter, Boston has to be in position to win far more games that last year -- and that all starts with Lester and Buchholz.
Posted by Saul Wisnia at 11:33 PM