Jason solves the riddle of the Fenway Double Rainbow 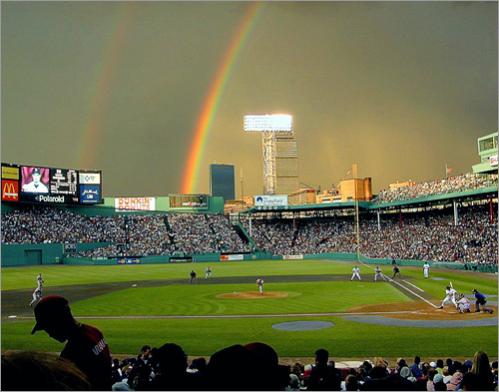 One of several different shots of the Fenway "Double Rainbow"

In 2000, my dad Saul got an email from a friend with an amazing photo of a double rainbow the friend had taken during a Red Sox game at Fenway Park. My dad was at the game too, and many fans who were there took photos similar to the one he received. Soon the internet was filled with them.


(If you don’t understand or know what a “Double Rainbow” is, here is a link to the original YouTube video that started the trend.It's by Hungrybear9562.) Make sure you play the audio.

The original viral video of "A Double Rainbow"

Now, 13 years later, my father still had the photo and was using it as desktop wallpaper on his computer. He had forgotten, however, when it was taken, who was playing the Red Sox, who was batting, and all the other information about this amazing photograph. On the old JumboTron scoreboard at Fenway you can see the number 20 (or maybe 10) faintly, and the other words and numbers are fuzzy too. Also, it’s hard to tell who’s batting (the Red Sox or the visiting team) because all the uniforms seem the same shade of white.

We thought it would be fun to figure out this mystery.

We Googled “Double Rainbow over Fenway Park Photo." One of the first links was to a company selling the photo: http://www.nytstore.com/1/1/4413-fenway-park-rainbows-2000-nsap568.html The ad stated that the picture was taken during “July 2000” when the Red Sox were playing the Atlanta Braves, both facts which my dad had forgotten. But there was one downfall; it did not state the exact date.

So we went to http://www.baseball-reference.com, and looked up the 2000 Red Sox. We then went into the season schedule for the month of July. We looked over the games for any dates when they played the Braves at Fenway; they met the Braves on July 8th and 9th. We then looked over the Red Sox’s lineup for those games, because we were pretty sure they were the team batting in the picture.

We were wrong! None of the players on the Red Sox roster that year wore the number 20.

We then looked over the Braves lineup for the same two games. None of them had the number 20 either. So we decided that maybe it was number 10. The only player on either team's roster for those two games who wore the number 10 was Chipper Jones. 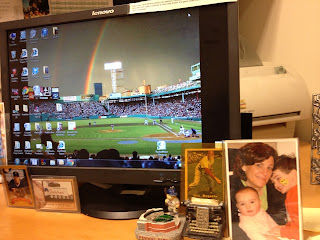 The view from dad's desk.

Mystery solved? Not so fast.

In the original photo, the first name of the player on the scoreboard looked too short to be "Chipper," but when we enlarged the picture we realized the player actually had on a Red Sox cap .

How could this be?

We went back over the season schedule, and noticed we had missed a game against the Braves on July 7th!

Looking at the Red Sox lineup for THIS game, I found the perfect match. The starting catcher on July 7th was Scott Hatteberg, and he wore number 10 on the Red Sox for all of 2000.

Now that we knew the batter, we decided to go deeper into the mystery. We wanted to know what inning he was batting in, and against what pitcher. 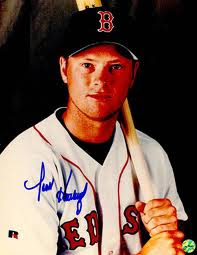 
I looked up the pitchers who played for the Braves in that game, and they were Tom Glavine, John Rocker, and Kerry Ligtenberg. Going over the inning-by-inning linescore, we saw that Hatteberg batted in the bottom of the 2nd, as the third batter, and struck out against Glavine. He also came up in the bottom of the 5th, and hit a ground ball out off Glavine.

In the photo you can see that there is a player on first base. I looked closer at the bottom of the 2nd to see if someone had reached first. The first batter, Ed Sprauge, walked. Then the next batter before Hatteberg, Manny Alexander, had hit a fly ball out to right field. So Hatteberg's first time at bat, there was indeed someone on first base. His second time up he led off the inning, so that would not work.

So, in my dad's screensaver photo and the many other double rainbow shots matching it, Scott Hatteberg is batting against Tom Glavine and the Atlanta Braves on July 7th, during the bottom of the 2nd inning. 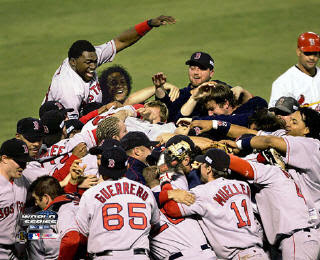